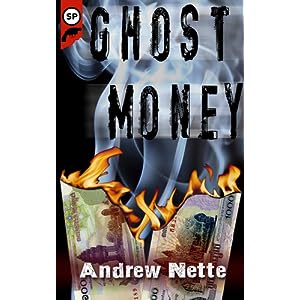 Cambodia, 1996, the long-running Khmer Rouge insurgency is fragmenting, competing factions of an unstable coalition government scrambling to gain the upper hand. Missing in the chaos is businessman Charles Avery. Hired to find him is Vietnamese Australian ex-cop Max Quinlan.

But Avery has made dangerous enemies and Quinlan is not the only one looking. Teaming up with Heng Sarin, a local journalist, Quinlan’s search takes him from the freewheeling capital Phnom Penh to the battle scarred western borderlands. As the political temperature soars, he is slowly drawn into a mystery that plunges him into the heart of Cambodia’s bloody past.

Ghost Money is a crime novel, but it’s also about Cambodia in the mid-nineties, a broken country, and what happens to people who are trapped in the cracks between two periods of history, locals and foreigners, the choices they make, what they do to survive.

The thing that struck me most about GHOST MONEY was the feeling of authenticity and detail about a period in Cambodian/Vietnamese history that I have lived through but am sadly ignorant about, despite Australia's involvement in the so-called Vietnam War. Andrew Nette uses his principal characters and those whom they meet, to deliver a series of mini-history lessons, starting with Australian/Vietnamese Max Quinlan's own background.


In a strange way, Quinlan and Cambodia had history. Memories of his father shouting at their black and white television, on the screen, Asian soldiers, terrified faces under steel helmets too large for their heads, running from an invisible enemy, the sky behind them full of fire and smoke.

It was 1975; Max was nine years old. Phnom Penh was about to fall to the Khmer Rouge. His father Lester Quinlan was stationed in neighbouring Vietnam as an Australian army advisor in the mid-sixties and images of the war had been commonplace in the lounge room of their house in North Melbourne.

The images fascinated Quinlan as a child, only becoming menacing with his father’s growing agitation over the course of the conflict. When Saigon had fallen a month earlier, Lester Quinlan had yelled at the newsreader like an irate football fan castigating an umpire for a bad decision. Maxwell Quinlan had been born in the port town of Vung Tau in 1965. Three months later his Vietnamese mother was killed when a bomb exploded in the local market where she was shopping. Lester brought the boy home – his last act of bravery before drink and bitterness consumed him.

Quinlan's search for missing businessman Charles Avery takes him, and the reader of course, from Thailand to Phnom Penh.  Despite the slabs of historical detail, or maybe because of the vividness of it, we remain engaged in the realism of the search for Avery and an understanding of what he is up to.

An impressive debut novel hardly surprising given Nette's own journalistic experience, and interest in pulp fiction.

For a related novel, not quite as noir in its approach, see also Shamini Flint's INSPECTOR SINGH INVESTIGATES: A DEADLY CAMBODIAN CRIME SPREE

See other reviews at
About the author

Andrew Nette is a writer based in Melbourne, Australia, with a fascination for crime fiction and film, obscure pulp novels and all things Asian.

He lived in Southeast Asia for six years in the nineties, based in Laos, Vietnam, Cambodia and Thailand. During that time he worked as a journalist, and as a communications consultant for the United Nations and a number of non-government organisations.

He has since travelled frequently in Asia and lived in Phnom Penh with his family for a year in 2008, where he wrote for the international news wire, Inter Press Service, and worked on a European television documentary on the international tribunal into the crimes committed by the Khmer Rouge.