After 2 years absence, Kirstin Rutherford returns to Edinburgh to find that h 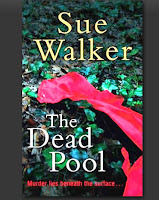 er ex-husband's father, Jamie has died 5 months earlier, drowning in The Cauldron in Leith. There is a possibility that Jamie's death was suicide but this seems very unlike the man whom Kirstin remembers and she becomes determined to find out as much as she can about the circumstances surrounding his death.

Some months before his death Jamie had become volunteer head warden for the river and had crossed paths with a group of locals who wanted to use the popular river parks near The Cauldron for parties involving drugs and alcohol. Jamie's confrontations with them culminated when two of them were murdered, and another one, Morag, of the group was accused of the murders, but then released without charges being laid. Jamie had always said that Morag was innocent, but is his own death somehow connected with his determination to prove Morag's innocence?

I read and enjoyed both of Sue Walker's earlier novels THE REUNION, and THE RECKONING, enjoyed them, and looked forward to reading THE DEAD POOL.

Sue Walker decided to tell this story from several angles: with flashbacks to the time of the dual murders - these are dated and in italics so the reader can tell what they are; with excerpts from Jamie's logs and diaries although in fact these are not all that helpful; and then through conversations and confrontations between the various characters.

I'm not sure about what in this novel did not work for me. If I hadn't been curious about who had committed the original murders, and whether it was in fact connected to Jamie's apparent suicide, then I would have been tempted to stop reading. I think it was just that I disliked the characters so much.....

My rating 3.8
Sue Walker's web site is at http://www.sue-walker.com/

I didn't enjoy her first book, The Reunion, very much. It started well, I thought-- good situation and premise -- but for me it did not sustain interest. I haven't read any subsequent books by Sue Walker but I know she has many admirers, so I probably should.

I have just read two fantastic books, by the way, not sure if they are out in Australia (or Abu Dhabi!), but I recommend very highly: Broken by Karin Fossum and Echoes of the Dead by Johan Theorin. My reviews of both are submitted to Euro Crime.

All the best, enjoy the rest of your wonderful holiday!

I read a blurb for BROKEN Maxine and look forward to finding your review.
With the first two Sue Walker novels, the rest of my f2f group didn't think much of them, but I did like them. But this latest one had just too much introspection by the characters, and they were in general pretty maimed and self-centred too.