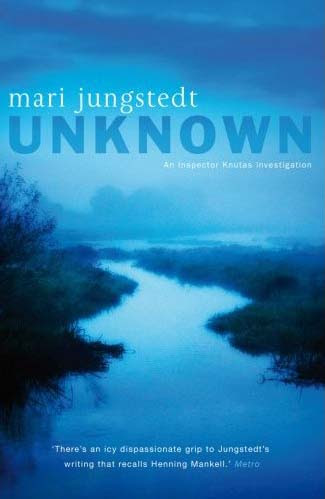 Publisher's Blurb
It’s summer on Gotland and an international group of archaeology students are excavating an ancient Viking site. The camaraderie and holiday spirits of the group are shattered when one of their number, a Dutch student called Martina, disappears. Rumours abound about a secret relationship she was having with someone on the island, but is her disappearance simply a lover’s intrigue? When the body of a horse is discovered in a local farmer’s field, other rumours begin to circulate. The horse had been decapitated and the head has vanished. Why would someone take a dead horse’s head? As Inspector Knutas begins his investigation, echoes from Gotland’s Viking past begin to trouble his search. When Martina’s naked body is found hanging from a tree, with what look like ritualistic markings on her skin, there can be little further question. Someone is calling to the old Gods of Gotland. Martina has been killed according to the Viking ritual of the three-fold death, and the one thing the ritual points to is that more deaths will follow.

My take:
Note to self: put Gotland on my list of dangerous places never to be visited! (My list includes St. Mary Mead, and Midsomer and neighbouring villages - what does yours include?)

For a summer vacation spot, the small island of Gotland is very perilous. In this, the third in Mari Jungstedt's Anders Knutas series set on this island, the author continues strands begun in the earlier novels. For example, the story of journalist Johan Berg and Emma who have now progressed to having a baby.

The main story was well told and the elements came together quite well. The interaction between the police investigation led by Knutas and the press, represented by Berg, is a bit formulaic and predictable, with Berg releasing details ahead of when the police want to. I didn't come away feeling that I knew Knutas much better
though. There was a little humour with someone from Knutas's past joining the investigation team and insisting on calling him "Knutie". You could feel the thunder in the air!

Another aspect I found interesting is that when some of the interviews need to be conducted in English, Knutas has to use another team member to conduct the questioning, because his own English is inadequate. This adds to his level of frustration with the lack of progress in the investigation. As his own family go off to the mainland for their summer holidays and he has to stay behind Knutas becomes even more frustrated.

So, this is a good read, but make sure you read the earlier novels first to get the best out of the continuing stories.

Another novel in the series was published in English in 2010: THE KILLER'S ART.
See reviews at Crime Scraps, DJ'sKrimiblog, and International Noir Fiction

Kerrie - Thanks for this excellent review. I'm so glad you brought that up about the need to bring in interpreters during some of the interrogations. That's real-life. That happens. I like it when a crime novel has that touch of authenticity.

I have to admit that I will print it out and use it for the coming year.

Have a great holiday and new year!