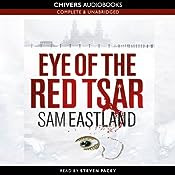 It is the time of the Great Terror.
Inspector Pekkala - known as the Emerald Eye - was once the most famous detective in all Russia, the favourite of the Tsar. Now he is the prisoner of the men he once hunted.
Like millions of others, he has been sent to the gulags in Siberia and, as far as the rest of the world is concerned, he is as good as dead. But a reprieve comes when he is summoned by Stalin himself to investigate a crime. His mission - to uncover the men who really killed the Tsar and his family, and to locate the Tsar's treasure. The reward for success will be his freedom and the chance to re-unite with the woman he would have married if the Revolution had not torn them apart. The price of failure - death.
In a land of uneasy alliances and deadly treachery, pursuing clues that have eluded everyone, Pekkala is thrust into the past where he once reigned. There he will meet the man who betrayed him and the woman he loved and lost in the fires of rebellion—and uncover a secret so shocking that it will shake to its core the land he loves.
Set against the backdrop of the paranoid and brutal country that Russia became under the rule of Stalin, Eye of the Red Tsar introduces a compelling new figure to readers of crime fiction

My take:
One of the problems with historically based fiction is always how reliable the depiction of characters and events is. And how does the ordinary reader know? Can you judge authenticity in subjective ways like how the supposed "facts" feel?

The fate of the Romanovs has always been a topic of great debate. There were of course "sightings" of members of the family well after their deaths had been affirmed, and even women who claimed to be Anastasia. Sam Eastland (a pseudonym of Paul Watkins) has taken much of that into account in the supplementary information at the end of the novel, where he gives a timeline of events and claims.

The action in the novel flutters from pre-1917, into 1917 itself, and then backwards and forwards into 1929. It does build up a strong picture of the time, and really brings Inspector "Emerald Eye" Pekkala's search for the truth to life. Pekkala is torn between his loyalty to the Tsar and his family, particularly to the boy Alexei,  and the real reason why Stalin has released him, the search for the treasure the Romanovs were supposed to be carrying with them. There are those who will not like this picture of the Tsar as a benevolent father and kindly gent, but unfortunately it is often only fictionalisations, not the dry notes notes of historical tomes, that reconstruct personalities.

The next title in the series THE RED COFFIN was published earlier this year.

Another review to check