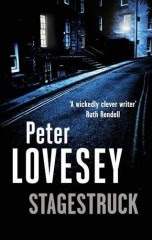 A Peter Diamond Mystery
Clarion Calhoun is a fading pop star wanting to launch an acting career. The audiences at her debut at Bath’s Theatre Royal are expecting a dramatic evening, but what they get is beyond their wildest imagination. When Clarion is rushed to hospital with third-degree burns, rumours spread through the theatrical community and beyond. In the best theatrical tradition, the show goes on, but the agony turns to murder.
The case falls to Peter Diamond, Bath’s top detective, but for reasons he can’t understand, he suffers a physical reaction amounting to phobia each time he goes near the theatre. As he tries to find its root in his past, the tension at the Theatre Royal mounts, legends come to life and the killer strikes again.

Peter Lovesey is a much loved author and STAGESTRUCK came up to expectations.
As always there's much more seething just under the surface than the initial scenario and STAGESTRUCK is a cautionary tale for artistic impresarios who decide they want to change horses.

In #11 in the Peter Diamond series, the head of Bath's CID is still at the mercy of Georgina Dallymore, the assistant chief constable, who has recently joined BLOGS (the Bath Light Operatic Group) and has a personal interest in anything related to the Theatre Royal. She foists Sergeant Horatio Dawkins, dance tutor to BLOGS, on to the CID team much to Diamond's dismay. But Dawkins has hidden talents.

STAGESTRUCK will particularly appeal to those who have attended performances in the Theatre Royal, exploring back stage workings, and theatre hoodoos such as the grey ghost and dead butterflies. But wound through it all is a cleverly and tightly written plot, two deaths, and a range of believable characters. And throughout, Peter Diamond is trying to discover what event in his past gave him an aversion to theatres.

Kerrie - An excellent review - thanks. So glad to hear the Diamond series is still good :-). I admit I haven't got this far with this series, but I am happy that good stuff awaits me.

Excellent review, Kerrie! I am working my way through the series, thanks to your review last year (of Skeleton Hill, I think). I am really liking this series. He is such a down-to earth policeman, isn't he? And interesting secondary characters and motives.

I'm a big fan of Peter Lovesey. I have STAGESTRUCK on my shelves. Time to take it down and read it. Wonderful review!