Review: THE WEED THAT STRINGS THE HANGMAN'S BAG, Alan Bradley 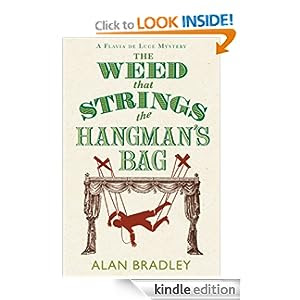 Synopsis (from author's site)
When a traveling puppet show sets up on the village green in Bishop’s Lacey, death stalks the little stage. Flavia goes behind the scenes to learn the craft (so to speak) in order to catch an ingenious killer.

From Scribd
Flavia de Luce, a dangerously smart eleven-year-old with a passion for chemistry and a genius for solving murders, thinks that her days of crime-solving in the bucolic English hamlet of Bishop’s Lacey are over — until beloved puppeteer Rupert Porson has his own strings sizzled in an unfortunate rendezvous with electricity. But who’d do such a thing,and why? Does the madwoman who lives in Gibbet Wood know more than she’s letting on? What about Porson’s charming but erratic assistant? All clues point toward a suspicious death years earlier and a case the local constables can’t solve — without Flavia’s help. But in getting so close to who’s secretly pulling the strings of this dance of death, has our precocious heroine ﬁnally gotten in way over her head?

Hanging out in the company of a precocious nearly-eleven year old whose passions are death, chemistry, and poisons won't be every crime fiction reader's cup of tea. In fact anybody in the company of Flavia de Luce has to be very careful of what you eat and drink.  But having said I wasn't sure of Flavia in my review of #1 in the series THE SWEETNESS AT THE BOTTOM OF THE PIE I have to say now that I am hooked.

There is something very engaging about all that precociousness and enthusiasm. Alan Bradley could easily have written these novels using a more conventional sleuth but Flavia manages to go places that adults simply couldn't or wouldn't go and assemble information in a way they couldn't. Flavia, despite her precociousness, doesn't always understand what she's learnt, and that is where the reader with (our) superior life experience comes in.

THE WEED THAT STRINGS is really a light yet quirky cozy read. Sure there is a murder mystery to be solved and plenty to exercise the brain that likes puzzles, but there is really no blood and gore. There's a taste of village life in Britain in the 1950s, with a German ex-prisoner of war who fell in love with the Brontes, a glimpse of the beginning of popular television, alongside manorial society struggling to survive.

A very enjoyable read. My rating: 4.5

Read an extract of THE WEED THAT STRINGS THE HANGMAN'S BAG.
Alan Bradley talks about how he found Flavia (or did she find him?)
The Flavia de Luce website

I still haven't read the first book in this series. I did borrow it but had to return it unread. Time to request it again I think.

Sorry but I don't know where else to ask this question so I'll ask here.

Is anyone going to host a 2012 Global Book Challenge?

I, for one, benefited greatly from this, read books from 20 countries -- with still a few days left in the year. And hit the intermediate level in the challenge.

It makes a difference to me, pushes me beyond my comfort zone and sends me to new countries and authors when there is a challenge.

Best wishes for a new year of great crime fiction!

Kerrie - So glad you liked this one! And yes, Flavia is a delightful protagonist isn't she? To be honest, when I first read about her I wasn't sure either, but like you I've come to like her very much.

I didn't like this book as well as you did, but I like the series and character a lot. I thought the last one, I AM HALF-SICK OF MYSTERIES, was the best. That's a quirky story too.

I loved the first one so much that I gave my daughter the second and third. I must get round to them soon even though they won´t help me reduce my own TBR :)

These mysteries are all about the love of Flavia, I may just read this one this weekend.

I like how you said it is our experience that comes into figuring it out etc, great point.