Review: THE ABOMINABLE MAN, Maj Sjowall and Per Wahloo 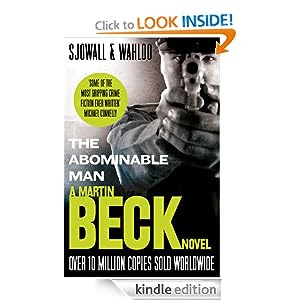 On a quiet night a high-ranking police officer, Nyland, is slaughtered in his hospital bed, brutally massacred with a bayonet. It's not hard to find people with a motive to kill him; in fact the problem for Detective Inspector Martin Beck is how to narrow the list down to one suspect. But as he investigates Nyland's murder he must confront whether he is willing to risk his life for his job.

Written in the 1960s, these masterpieces are the work of Maj Sjowall and Per Wahloo – a husband and wife team from Sweden. The ten novels follow the fortunes of the detective Martin Beck, whose enigmatic, taciturn character has inspired countless other policemen in crime fiction.
The novels can be read separately, but do follow a chronological order, so the reader can become familiar with the characters and develop a loyalty to the series. Each book will have a new introduction in order to help bring these books to a new audience.

This was a thoroughly enjoyable read. It both analyses what makes people commit horrendous crimes, and what constitutes good policing.

We learn early on that the high ranking police officer killed was not a good policeman. Martin Beck's colleague Kollberg says "he was a barbaric son of a bitch of the very worst sort." His name was never discredited, and complaints against him never got past the submission stage. And many of the current personnel in the Stockholm Police force were incredibly loyal to him because he had trained them.
As the blurb indicates, there is no shortage of people who would be glad to see this person dead, but just one has reached the point of no return, deprived of both his wife and his daughter by this man.

The authors also make some interesting commentary on what happened to the city of Stockholm in the 1960s when 90% of the old city was demolished to make way for "modern" development.

This series follows the changes in Martin Beck's personal life as he rises in the force. He is now the chief of the National Murder Squad, his marriage has collapsed and he unashamedly lives for his work.

One of the most enjoyable aspects of these novels is the amount of descriptive detail included, and small nuances in relationships between the men who make up Beck's team. Beck is very demanding, but he does not demand any more from them than he does of himself.

Kerrie - Oh, I always enjoy a Martin Beck novel! I've not read this one in a very long time, so thanks for the reminder :-).

This one (along with about 6 others that I picked up at the Library sale) is lurking on my TBR pile--now I just need the time to read it....

Nice choice Kerrie - I think this is my favourite of the series actually, and I rate most of them pretty high anyway, but it seemed to have the best combination of character, plot and theme.

It is such a great series, in so many senses. Thanks for the reminder of how much I enjoyed this book & the rest.

This reminds me that I have four left to read in this series, and that I should read one more soon.

I try to pace them so I still have some left to read.