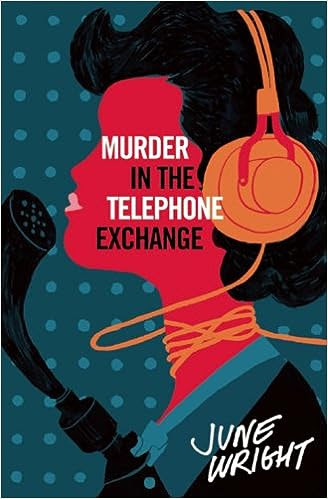 First published in 1948, when it was the best-selling mystery of the year in the author’s native Australia, Murder in the Telephone Exchange stars feisty young operator Maggie Byrnes. When one of her more unpopular colleagues is murdered — her head bashed in with a “buttinski,” a piece of equipment used to listen in on phone calls — Maggie resolves to turn sleuth.

Some of her coworkers are acting strangely, and Maggie is convinced she has a better chance of figuring out who is responsible for the killing than the rather stolid police team assigned to the case, who seem to think she herself might have had something to do with it. But then one of her friends is murdered too, and it looks like Maggie might be next. Narrated with verve and wit, this is a whodunit in the tradition of Dorothy L. Sayers and Daphne du Maurier, by turns entertaining and suspenseful, and building to a gripping climax.

There are a few hints in the story about the time frame of this novel. It is set in Melbourne very definitely after World War One and very likely after World War Two, about the time of publication. The initial murder victim, Sarah Compton, is described as middle aged, and has been working at the telephone exchange since 1917. Many people have cause to hate her: she is greedy, grasping, and not above using people's secrets for blackmail.
The setting is the manual telephone exchange in Melbourne where Compton works as a monitor or supervisor. Hundreds of people, mainly girls and women, work here in shifts. The twenty four hour  exchange controls telephone traffic in Melbourne and between Melbourne and the country side and other Australian cities. All connections are facilitated by a telephonist, written dockets are kept detailing time and length of calls as well as numbers. The system means that each phone call leaves an extensive paper trail. Despite frantic activity at some parts of the day, the telephonists also have the opportunity to listen in on calls, and in rural towns switchboard operators are often the source of the latest news and gossip.
I am just old enough to remember the time when not everyone had a telephone line to their house, when households shared 'party' lines, when you rang the operator requesting a number rather than dialing it yourself. At peak times there could be extensive delays in connecting calls, and even then there was a three minute limit on the length of the call.
The Melbourne exchange was huge, employing hundreds, and so this means there are a large number of suspects for Compton's brutal murder. Maggie Byrnes sees herself as a bit of a sleuth, but she is young, and not much of a judge of character. With a misguided sense of loyalty she withholds information from the investigating police with the result that another of the telephonists dies, and then another. Maggie herself is attacked as the police close in on their main suspect.
Despite a lot of muddying of the waters I managed to select the right candidate for murderer early on, but really wasn't sure of the motive. In the long run I thought the motive was a bit far fetched.
An interesting novel which I thought needed a bit of editing in the last half. I thought the denouement was rather long winded and some of the final reasons given could have been released as clues earlier on. Not bad for a debut novel though.
My rating 4.1

About the author
June Wright (1919 - 2012) was the Australian author of six detective stories, the last three featuring Mother Paul. Born in Melbourne, where most of her books are set, she had begun her writing career by winning a competition run by a London publisher. This ensured the publication of her first book, Murder in the Telephone Exchange in 1948. She herself had been working in a telephone exchange for four years. She was the mother of six children. Her last novel was published in 1966. She then retired from writing to help her husband with his business.
Posted by Kerrie at 8:04:00 am

Sounds like a solid look at the time and place, Kerrie.

June Wright was completely unknown to me until very very recently, and after reading two reviews in as many weeks her books sound very interesting indeed. Thanks for this review, as it's given me even more reason to check her out.