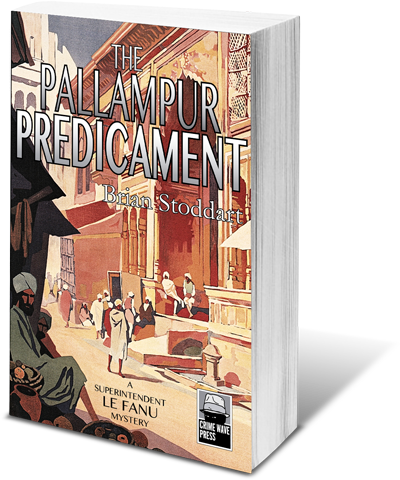 The second Superindentent Le Fanu Mystery sees our intrepid British policeman on the trail of the murderers of an Indian Rajah.

Under pressure from his superiors, pining for his lost love and allergic to the sight of blood, Le Fanu must navigate through a political mine-field of colonial intrigue in 1920s Madras.

As the British tighten their grip on the sub-continent, Gandhi’s peace movement, British secret agents and armed pro-independence rebels complicate Le Fanu’s investigations further and he soon finds himself in a quagmire of violent opposing forces that are unwilling to compromise.

Set two years after the first in the series (A MADRAS MIASMA) this novel does a good job of depicting the ways in which the British Raj is losing control of India. The Rajah of Pallampur, married to an Australian bride, is found dead in his palace. The attack leading to his death appears to have been unusually frenzied. The Rajah was not particularly popular and Superintendent Le Fanu discovers that he has been under surveillance by British intelligence ever since the end of World War One. He appears to have had IRA connections, and was perhaps involved in gun running.

In the background Gandhi's non-violent non-cooperation movement is ramping up but not all of his followers believe that non-violence is the way. Many of the British civil servants do nit understand what a knife edge they are living on.

The novel does a good job as a police procedural and develops the relationships between Le Fanu and his superiors and his colleagues. It is two years since Le Fanu's housekeeper Ro left and he has missed her company more than he likes to admit. During the novel Ro comes back to Madras for a holiday and Le Fanu realises he must make decisions about their relationship.