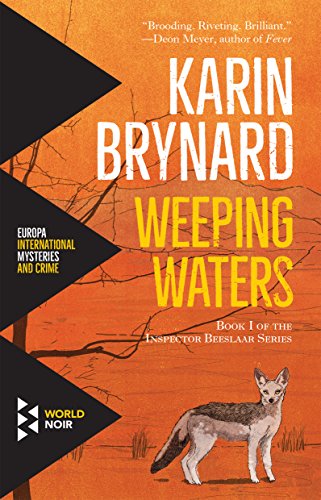 Translated from Afrikaans by Maya Fowler and Isobel Dixon

Inspector Albertus Beeslaar is a traumatized cop who has abandoned tough city policing and a broken relationship in Johannesburg for a backwater post on the edge of the Kalahari Desert. But his dream of rural peace is soon shattered by the repeated attacks of a brutally efficient crime syndicate, as he struggles to train and connect with rookie local cops, Ghaap and Pyl, who resent his brusqueness and his old-school ways.

A beautiful and eccentric artist and her four-year-old adopted daughter are murdered on a local farm, and angry white farmers point to her enigmatic Bushman farm manager as a key suspect. Along with Ghaap and Pyl, Beeslaar is plunged into the intrigue and racial tensions of the community and finds that violence knows no geographical or ethnic boundaries.

Weeping Waters marks the beginning of a great new series with a striking new setting, a strong ensemble cast of characters and suspenseful storylines.

There have been a number of farm killings in the area, over recent times, blamed on stock thieves. Two farm workers had been brutally murdered just a fortnight before, their bodies discovered underneath the carcasses of sheep.

But this killing appeared to be different: a woman and a 4 year old girl, the bedroom chaotic as if someone had been searching for something.

Inspector Beeslaar has failed to find any clues about the stock thieves so far and local whites are asking for the reinstatement of commandos and acting as vigilantes themselves, convinced that they intent is to drive them from their land.

Huilwater Farm is isolated and the murders have been discovered by a neighbour calling in to pass the time of day.

The threads of the story focus on land rights, inheritance, and racial undertones, as well as the pressures on Inspector Beeslaar to "perform".

About the author
Karin Brynard is a former political and investigative journalist and uses her research skills and eye for detail to fascinating effect in Weeping Waters. She is, today, one of Penguin South Africa’s biggest authors.