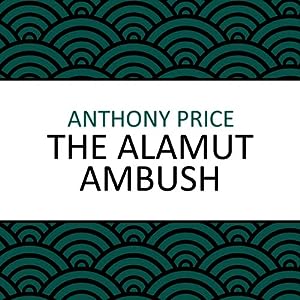 A brilliant young electronics expert is killed by a car bomb seemingly meant for the head of the Foreign Office's Middle-Eastern Section. Intelligence officer Hugh Roskill is sent by David Audley on an investigation that takes him from London club-land to the Hampshire countryside, and deep into the complexities of Middle Eastern politics, to find the answer to two questions: who was the real target of the bomb?

And what is Alamut? Against the backdrop of the Arab-Israeli conflict in the period before the Camp David Accords, Dr Audley and Colonel Butler are confronted with an assassin capable of turning the Middle Eastern conflict into Armageddon.

THE ALAMUT AMBUSH is probably not best read episodically as an audio book where you can't easily turn back the pages to check details.

Like the first in the series, THE LABYRINTH MAKERS, the plot starts off simply enough but soon drops into complexities involving British, European, and Middle Eastern espionage agents. The background is the apparent resolution of the Arab- Israeli conflict (1967) with a peace that appears to resolve nothing and suit nobody.

I did not particularly enjoy this novel as it, too quickly for me, became a mixture of fact and fiction, and my knowledge of the period was really too shaky for me to be able to separate the two. For an audio version of the book there are really too many foreign sounding names, and the main British manipulator David Audley does not appeal as a character.

So for me, not a satisfactory read, because far too often I was totally out of my depth. But I can understand that readers looking for espionage style fiction along the lines of John Le Carre would have found the hard print versions of this series very appealing.

Anthony Price was born in England in 1928. He became a captain in the British Army before studying at Oxford University, then became a journalist on the Westminster Press and Oxford Times. Price is the author of nineteen novels featuring Dr David Audley and Colonel Jack Butler, which focus on a group of counter-intelligence agents.
Approximately twenty years elapse between the first and last novel in the series, and most of the plots are connected with one or more important events in military history. The first three novels were adapted into a six-part BBC TV drama in the 1980s, and THE LABYRINTH MAKERS (for which he won a CWA Silver Dagger) and Other Paths to Glory have both been produced as BBC radio dramas.

Kerrie - Thanks for your candor. Honestly, not exactly my sort of thing either, but then I'm not as much of a person for a steady diet of espionage fiction (with a few exceptions).