A murder in broad daylight…
A teenage girl is killed on a London bus. The case should be simple. The bus was full of witnesses, and there are cameras everywhere.

A hunt for a killer…
But the more DC Georgia Shaw and her colleagues Maeve Kerrigan and Josh Derwent delve into the crime, the more elusive the answers become.

A case that spirals out of control…
It seems impossible that no one saw anything, but soon the leads run cold. Will they uncover what really happened, or will the killer get away with murder?

For fans of the Maeve Kerrigan series, this is a story with a difference. Told from Georgia’s point of view, we see Maeve and Josh from the outside…like you’ve never seen them before.

A quick read, this has the feeling of a full-fledged novel, a strong plot, an investigation, lots of suspects, strong characters, the victim an unpleasant school girl, the murderer a person who has just had enough, a murder that was never meant to happen.

It is 1997, and in a basement flat in Hackney Isla Green is awakened by a call in the middle of the night: her father, Joe, phoning from Sydney.

30 years ago, in the suffocating heat of summer 1967, the Greens’ next-door neighbour Mandy disappeared. Joe claims he thought she had gone to start a new life; but now Mandy’s family is trying to reconnect, and there is no trace of her. Isla’s father was allegedly the last person to see her alive, and he’s under suspicion of murder.

Back home in Sydney, Isla's search for the truth takes her back to 1967, when two couples lived side by side on a quiet street by the sea. Could her father be capable of doing something terrible? How much does her mother know? And is there another secret in this community, one which goes deeper into Australia’s colonial past, which has held them in a conspiracy of silence?

Deftly exploring the deterioration of relationships and the devastating truths we keep from those we love, The Silence is a stunning debut from a rising literary star.

It is very rare for me to read a book within 24 hours. But I have, so let that fact be testament to how much I enjoyed this book.

On the surface this mystery is about the disappearance of a young woman, essentially a cold case that a police officer hushed up, brought on by the nature of her husband's shameful job.

This book is one of those rare combinations: crime fiction and a poke at Australia's history.  I'd love to be able to claim Susan Allott as an Australian writer, but she is British. But she has been able to bring to this novel a very significant understanding of something in Australian history that for decades people tried to gloss over.

Susan Allott is from the UK but spent part of her twenties in Australia, desperately homesick but trying to make Sydney her home. In 2016 she completed the Faber Academy course, during which she started writing this novel. She now lives in south London with her two children and her very Australian husband.

A taut, page-turning novel of secrets and strife. When two families - one rich, one not - holiday together off the coast of South Carolina, little do they know that someone won't be returning home.
Fripp Island, South Carolina, is the perfect destination for the wealthy Daly family: Lisa, Scott, and their two girls. For Lisa's childhood friend, Poppy Ford, the resort island is a world away from the one she and Lisa grew up in -and when Lisa invites Poppy's family to join them, how can she turn down an all-expenses paid vacation for her husband and children?

But everyone brings secrets to the island, distorting what should be a convivial, relaxing summer on the beach. Lisa sees danger everywhere, while Poppy watches over her husband John and his routines with a sharp eye. It's a summer of change for all of the children too, who are exposed to new ideas and different ways of life as they forge a bond of their own.

While revelations from the past and present unfold, the book builds to a shocking event that will shake your sense of justice and leave you wanting to talk about crime and retribution.

We know from the very beginning that someone has drowned, but not until near the end just who the victim is. We even know that it is murder, but not who is responsible.

But even so, the murder really comes out of left-field.

The build up consists of an exploration of the relationships within and between the two families. Each of the adults in particular have secrets, and a sinister element intrudes when Lisa recognises the name of someone on a sex-predator list. There is an indication that neither sets of parents knows their children as well as they think they do. One is a secret drinker, another grows pot, but their parents have no idea.

There is a sense of a ghost watching over things from on-high.

I didn't particularly like the ending of the book. It posed problems that weren't all that well re-solved.

Rebecca Kauffman is originally from rural Ohio. She studied Classical Violin Performance at the Manhattan School of Music before receiving an MFA in Creative Writing from NYU. Her previous novels are Another Place You've Never Been and The Gunners. She currently lives in Virginia.

Review: A ROOM MADE OF LEAVES, Kate Grenville

What if Elizabeth Macarthur—wife of the notorious John Macarthur, wool baron in the earliest days of Sydney—had written a shockingly frank secret memoir? And what if novelist Kate Grenville had miraculously found and published it? That’s the starting point for A Room Made of Leaves, a playful dance of possibilities between the real and the invented.

Marriage to a ruthless bully, the impulses of her heart, the search for power in a society that gave women none: this Elizabeth Macarthur manages her complicated life with spirit and passion, cunning and sly wit. Her memoir lets us hear—at last!—what one of those seemingly demure women from history might really have thought.

At the centre of A Room Made of Leaves is one of the most toxic issues of our own age: the seductive appeal of false stories. This book may be set in the past, but it’s just as much about the present, where secrets and lies have the dangerous power to shape reality.

Kate Grenville’s return to the territory of The Secret River is historical fiction turned inside out, a stunning sleight of hand by one of our most original writers.

It is very tempting to regard this book as definitive history of life in the early colony of New SouthWales, but both the author and the narrator remind us that it is "faction", a fiction that is a possible interpretation of the rather skimpy evidence available. However it serves to remind us of us difficult life in those times was, nothing like the life we live now. How did women like Elizabeth Macarthur survive and how much of the male legacy from those times is actually due to the women who accompanied them?

A very good read, with a touch of mystery and a little spice to keep the interest level up.

The latest novel from Robert Harris: chosen as a Book of the Year by The Times, Sunday Times, Guardian, Telegraph, Mail on Sunday, and Express.

What if your future lies in the past?

Dusk is gathering as a young priest, Christopher Fairfax, rides across a silent land.

It’s a crime to be out after dark and Fairfax knows he must arrive at his destination – a remote village in the wilds of Exmoor – before night falls and curfew is imposed.

He’s lost and he’s becoming anxious as he slowly picks his way across a countryside strewn with the ancient artefacts of a civilisation that seems to have ended in cataclysm.

What Fairfax cannot know is that, in the days and weeks to come, everything he believes in will be tested to destruction, as he uncovers a secret that is as dangerous as it is terrifying....

You might want to challenge some of my categories for this book. I've said it is not crime fiction although crimes have been committed. And I've said it is historical although it is set in the future.

The first challenge for the reader is to work when this novel is actually set. Dates are given that challenge our ideas of chronology.  How can a book that is set in future feel so much like it is set in medieval times? What has happened to "our world"?

I saw some reviews that said this book went nowhere - that the initial idea was good but the result was disappointing. I actually thought it gave us a lot to think about.

Until Darren and Jodie move in, Lowland Way is a suburban paradise. Beautiful homes. Friendly neighbours. Kids playing out in the street. But Darren and Jodie don't follow the rules and soon disputes over loud music and parking rights escalate to threats of violence.

Then, early one Sunday, a horrific crime shocks the street. As the police go house-to-house, the residents close ranks and everyone's story is the same: They did it.

But there's a problem. The police don't agree. And the door they're knocking on next is yours.

The middle class neighbours in Lowland Way are living life their way, and have even won an award for their community ideas. But now one of the elderly owners has died and someone else has moved in. They don't share the same ideals, play loud music all the time, don't have kids, and couldn't care less about the community.

Things go from bad to worse and the original community leaders come up with plans to get rid of Darren and Jodie. The plan back-fires and someone is accidentally killed.

The police seem to be constantly around and the death is called a homicide.

A very believable, if at the same time improbable, story of what can happen when ordinary people are taken to the brink. Families fall apart and the most unlikely come up with wicked schemes. 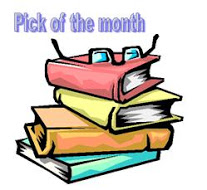 My reading appears to have slowed down a bit this month, not helped by the length of a couple of books