Adelaide - a good place to live 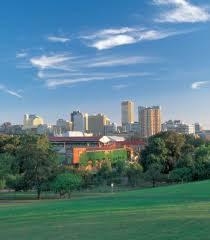 Adelaide is known by various monikers - driest capital in the driest state in the driest continent, city of churches, city of pubs, Festival state, centre of the Tour Down Under, home of Womadelaide, also of the Clipsal 500, and the prettiest cricket ground in the world: Adelaide Oval. The climate is surprisingly mild, given the fact that today 36 C is promised.

CLIMATE
The above is from http://www.aussie-info.com/places/sa/adelaide/ Writers Week, part of the Adelaide Festival of Arts, about to happen. Preceding that is the Fringe Festival, full of quirky shows.

I say local, but they are really the sort of things that happen in most largish cities. It is just that with a population of just over 1 million, including its suburbs, Adelaide is small enough for everything to be within easy reach, and for everything to feel as it is happening right on our door step. We are really just a largish town - despite the fact that we now have some really tall buildings and various megamillion industries, when we travel to other cities like Melbourne, Perth, Sydney, and Brisbane, you can't help being struck by their size.

In recent years we have become a bit notorious too with child abduction cases, serial murders, including recently the "body in the barrels" case. I reviewed Debbie Marshall's book KILLING FOR PLEASURE.
In KILLING FOR PLEASURE Australian journalist Debi Marshall tells the stories behind the grisly Snowtown "bodies-in-the barrels" serial killings, carried out over seven years in South Australia by three killers and their accomplices. KILLING FOR PLEASURE took Marshall five years to write, synthesising thousands of hours of interviews with the families of the victims, with neighbours, and with close members of the families of the murderers. What she describes pushes the boundaries of credibility, both in relation to the nature of the murders, and in the slowness of the South Australian police system to begin investigations.

Alan J Whiticker wrote in IN SEARCH OF THE BEAUMONT CHILDREN, about our most notorious child abduction/disappearance case, one which successful Australian author Kathryn Fox says has a big impact on her upbringing.

Adelaide has had a crop of budding crime writers too, some well known, others not.
Adelaide's Wakefield Press has printed a series called Wakefield Crime Classics which reprinted the work of authors such Patricia Carlon (The Whispering Wall), A.E. Martin, and Charlotte Jay.

Other writers to look for
Other nice links

Have you read City of Lights by Susan Mitchell? She tries to figure out why Adelaide seems to get more than its fair share of gruesome murders including the Snowtown murders and the 'The Family' murders.

Actually, the book was called "All Things Bright and Beautiful: Murder in the City of Lights by Susan Mitchell.

Thanks Marg. I haven't read any thing by Sue since Tall Poppies. I might look City of Lights up. I have heard her speak and I think she and Debbie Marshall share similar views about the tendency of Adelaide, particularly those in high places, to hush things up. When I was the teachers college goalie (hockey) Sue was my right full back :-)

When I was looking at something last night after reading your post, one of the things that they talked about was that if you talk to someone else from Adelaide then it is inevitable that you will know someone that they know! LOL!

Argh! I live in Adelaide. WHY dow e get so much crime and stuff. maybe I should movve LOL. Ah well. Very interesting ^^

good to hear from you Amanda. Maybe we will meet up one day