I'm taking this opportunity to air two reviews of Tess Gerritsen books that I wrote some time ago and had posted elsewhere. 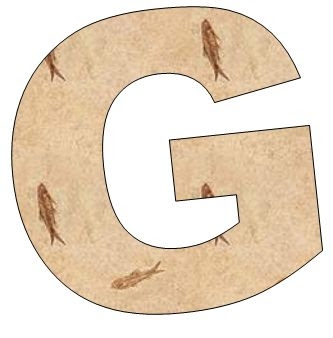 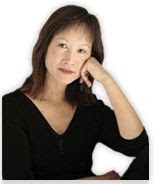 See other posts in the Crime Fiction Alphabet for the letter G here.

When Dr. Peter Saul and his wife Amy took their young nephew into their family soon after his father's death, they had no idea what they were letting themselves in for. Twelve years later a family friend Lori-Ann Tucker is found dead, dismembered, victim of a macabre killing. This new case for Boston PD detective Jane Rizzoli and pathologist Maura Isles will test their beliefs as well as strain their friendship.

The victim is discovered on Christmas Eve. Maura has just been to Midnight Mass conducted by Daniel Brophy, an out-of-bounds Catholic priest to whom she is very attracted. When Maura is called to the crime scene, she and Jane quickly realize that this is no ordinary homicide. Apart from the dismemberment of the body and the distribution of body parts in various rooms of the house, the murderer has also left ancient symbols daubed on walls and it seems as if this may be a Satanic killing. 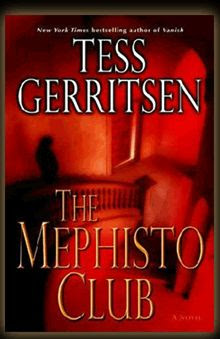 Jane Rizzoli is definitely out of her comfort zone in this investigation. It is bad enough to have to handle this sort of investigation at Christmas. When a young policewoman is found butchered outside the home of the leader of the Mephisto Club, with the same sort of symbols on the door of his house, Jane is confronted by evil. Jane refers to one of the members of the Mephisto Club, whom she has met before, as a vampire. And worse, at the post-mortem, Maura discovers that the dismembered hand found at the first murder scene does not belong to that first body.

I found THE MEPHISTO CLUB an engrossing page-turner. There are those who will not like the aspects of this story where Gerritsen invites readers to think about the historical origins of evil and refers to apocryphal texts and ancient Hebrew and Christian beliefs. However Gerritsen's fans will welcome this addition to the Jane Rizzoli/Maura Isles series. There is nice development in our knowledge of Jane's family life, and her friendship with Maura is tested. This is the sixth novel in this series and, if you have never read anything by Tess Gerritsen, it will send you off to find more. 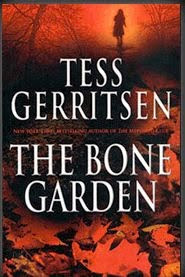 Maura Isles, Boston medical examiner, tells Julia Hamill that the skeleton she has dug up in her back garden is old, much older than the house that she has recently purchased. The skeleton is that of a female under 35 years, murdered and buried perhaps more than 150 years ago. Julia is recently divorced and had been labouring to convert the barren back yard into a garden when her shovel struck a skull. Now her backyard is an excavation site for the medical examiner's office.

For most of the book, which jumps - sometimes a little jarringly - backwards and forwards between the 1830s and the present day, we are following an ancestor of the last owner of the house, the person whose estate Julia bought the house from. We do this both through reading about events as they happen, and through papers and letters hoarded by the previous occupant Hilda Chamblett.

The prologue in THE BONE GARDEN is a letter dated in 1888 from O.W.H. to Margaret offering to tell her a secret about her parents that he has kept for fifty-eight years. Julia becomes involved in a quest to identify the skeleton when she is contacted by Hilda's elderly cousin Henry Page. He offers to tell her of the strange affair of Oliver Wendell Holmes, one of Boston's revered native sons, and the West End Reaper.

This is the eleventh of Tess Gerritsen's novels. It is almost a stand-alone. Maura Isles, one of the pair of usual protagonists in Gerritsen novels, makes only two cameo appearances at the beginning to give her verdict on the skeleton which has become the focus of excavation by the medical examiner's office. It almost feels like Isles is giving Gerritsen permission to branch out without her.

Writing 'cold case' books seems to have become popular with crime writers in the last year or two. For many it has been in the form of a police procedural, cold cases unearthed as retired detectives with time on their hands take advantage of technical advances like DNA and sophisticated fingerprinting software. Some have been cases of bodies buried for a decade or two. In THE BONE GARDEN Gerritsen was more ambitious, launching into a cold case almost two centuries old. Her images of Boston in the 1830s create for us an understanding of a time when medicine was in its infancy, anatomy a new science, and the world very different to the one we live in today.

On the Acknowledgements page, Gerritsen says she has had a long hard year labouring to bring THE BONE GARDEN to life. To be honest I don't think she has quite mastered the technique of interweaving of the present day with the historical. Just so that the reader doesn't get lost, she alerts us to each time change with chapter headings that say '1830' or 'The present'. In order to bring it off she has had to introduce elements of coincidence, dreams that connect Julia to events in the past, voices from the past clamouring to be heard, and more than one love story. I don't think Gerritsen fans will be disappointed, though. The writing is clever and tidy, there is more than one mystery to be solved, and despite the book's length, it flies quickly.

I used to enjoy the Jane/Maura novels but I think I must have stopped reading Tess G by the time these two came out? I don't recall them, anyway - but reading your reviews makes me think they are not my cup of tea at all. The reviews are very good, in that you have encapsulated why I probably would not like these books, which is one of the purposes of a good review. On the other hand, you have praised the aspects of the books you liked so that other readers who don't share my tastes may well go out and read them as a result!

I have read The Mephisto Club and many of the other Gerritsen novels (one of which may appear later in my own crime fiction alphabet posts) but not the Bone Garden. I seem to have a soft spot for Jane Rizzoli rather than Maura Isles.

Kerrie - I hadn't read Tess Gerritson before, although I'd wanted to read The Bone Garden. Thanks so much for reminding me of her work : ). Time for me to shuffle some things around on my ever-growing TBR list of authors...

I've read a few Tess G books, and I really hated the first one I read, but after having read a few more, I am beginning to like her better. The thing that keeps nagging me about her and her writing and her plots is more or less like you describe: she doesn't seem to be able to quite pull it off.

I have not read this author. I think I will.

The last one by her I read, I forget the title, is one in which one of them (maura or jane, forget which!) gets taken hostage in a clinic. I found it very tedious and slow, and concluded that the author is going the way of J. Kellemann, so have not read any since. Maybe they have picked up. I used to read them when Jane was pregnant; my memory is that it's the longest pregnancy in any series, as she always seemed to be pregnant in every book -- but it was probably only about 2!