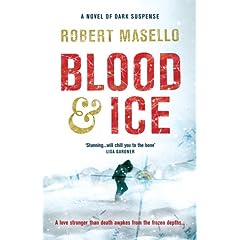 December 28, 1856, in the Southern Ocean very close to Antarctica, the captain and crew of the Brig Coventry make an unsettling discovery about their two passengers, a husband and his wife, and throw them overboard, in chains, into the frigid black water.

In the present day Michael Wilde photographic journalist is given a commission to write a feature about the work being done at Point Adelie in the Antarctic. On his first diving expedition in Antarctic waters he discovers frozen bodies trapped in an underwater glacier. What he doesn't expect is that they will wake.


Blood and Ice Trailer from Bantam Dell on Vimeo.
If you want to read more of the plot of this book than I am going to tell you here, visit the Bantam Dell site, or Robert Masello's own site, or even Amazon.

I've seen BLOOD & ICE categorised as suspense, thriller, fantasy, horror, and it certainly is a little outside my usual crime fiction fare. Certainly there is mystery, and there is murder, but Masello goes well beyond that in the themes that hold the plot together. Be prepared to have your credulity challenged. One reviewer wrote: riotous mix of history, cryogenics, vampirism, and a chilling adventure and he is not far wrong.

BLOOD & ICE took me a little beyond my comfort zone, but I liked the strong evidence of research that underlies the book, whether it is of the historical period surrounding the Crimean War in the 1850s, or life in an Antarctic research station. The writing is very polished and the stories intertwine well. The character of Michael Wilde is further fleshed out with the story of his girlfriend Kristin existing on a life support machine, after a climbing accident.

Robert Masello has written 6 other novels including BESTIARYand VIGIL.

BLOOD & ICE is his most recent.

Kerrie - I haven't read this one, but I will say that I'm glad you mentioned the research that goes into depicting a place and time. I agree that it's important that the research be good and the story be, in that sense, accurate, even if the plot asks one to suspend some disbelief.

Wow... Excellent dear, great post!! there is so information on this blog, keep posting like this so that i can come back every day for some new topic...