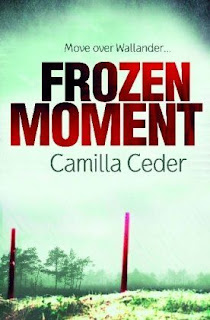 Publisher's Blurb
One cold morning, in the wind-lashed Swedish countryside, a man's body is found in an isolated garage. The victim has been shot in the head, and run over repeatedly by a car. Inspector Christian Tell, a world-weary detective with a chequered past, is called to the scene. But there are few clues to go by, and no one seems to be telling the truth.

Then, a second brutal murder. The method is the same, but this victim has no apparent connection with the first. Tell's team is baffled.

Seja, a reporter and witness, thinks a long-unsolved mystery may hold the key to the killings. Tell is drawn to Seja, but her prescence at the crime scene doesn't add up, and a relationship could jeopardise everything. For the inquiry to succeed, the community must yield the dark secrets of its past.

My take:
The opening pages struck an immediate chord with me - Ake Melkersson is on his way to his last day at work, thinking about what retirement will be like, when his car breaks down. He pulls into a garage just off the highway and discovers a body. At first he panics and drives away but then realises he must go back and alert the police. Not wanting to disturb his wife he phones his neighbour Seja to come and collect him. Seja is a free-lance journalist and the name over the garage door rings a bell with her.

Inspector Christian Tell and his team are (I think) at the Goteborg police station. They are a very mixed bunch, men of a variety of ages from near retiring to newly recruited, with one woman, Karin Beckman, who is rather sensitive about her role and status in the team. The author explores the team dynamics, showing how they work together, even though relationships are not always harmonious.

The structure of the book is interesting, with the "modern" action taking place from just before Christmas in 2006 to early January 2007.  The secondary timeline begins in 1993 when Maya, who is nearly eighteen, leaves home to enrol for three years in a folk high school. Maya's teenage years have been full of rebellion and she is looking forward to making a new start. Two years later Maya comes home to visit her mother..
It is inevitable that the two timelines will intersect.

FROZEN MOMENT is far from being just another police procedural. The plot is well developed and there is a lrage cast of charcaters. For both timelines there is quite a bit of back story, and it did come as a surprise to me to realise that this is Camilla Ceder's debut novel.  I had even thought at one stage that maybe FROZEN MOMENT was the second in a series.

Other reviews to check:
Camilla Ceder's second novel, BABYLON, was published in Swedish in 2010.

Finally a review I can read without having to rush off to put the book on my list! I read this one in Danish last year.