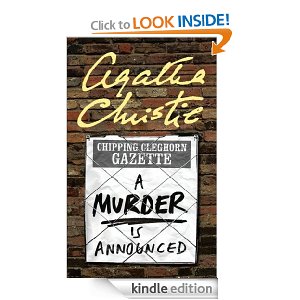 Agatha Christie’s most ingenious murder mystery, reissued with a striking new cover designed to appeal to the latest generation of Agatha Christie fans and book lovers.

The villagers of Chipping Cleghorn ... are agog with curiosity over an advertisement in the local gazette which reads: ‘A murder is announced and will take place on Friday October 29th, at Little Paddocks at 6.30 p.m.’

A childish practical joke? Or a hoax intended to scare poor Letitia Blacklock? Unable to resist the mysterious invitation, a crowd begins to gather at Little Paddocks at the appointed time when, without warning, the lights go out....

It has been 8 years and half a war since Jane Marple made her last appearances in THE BODY IN THE LIBRARY and THE MOVING FINGER  both published in 1942. Her fans could have been forgiven for thinking that her sleuthing days were over.

After a practical joke seems to have gone wrong in Chipping Cleghorn, and a man dies in consequence, Miss Marple becomes involved as a result of the championing by her old friend ex-Commissioner Sir Henry Clithering. The officer in charge of the Chipping Cleghorn case is Detective-Inspector Dermot Craddock. He is bemoaning the lack of insider information and Clithering extolls the observation powers of retired colonels and "old pussies".

‘Nice old Pussies and retired Colonels. Yes, if they noticed that advertisement they’d all come sniffing round at 6.30 to see what was up. Lord, I wish I had my own particular old Pussy here. Wouldn’t she like to get her nice ladylike teeth into this. Right up her street it would be.’ ‘Who’s your own particular Pussy, Henry? An aunt?’ ‘No,’ Sir Henry sighed. ‘She’s no relation.’ He said reverently: ‘She’s just the finest detective God ever made. Natural genius cultivated in a suitable soil.’

Craddock receives a letter from an elderly woamn staying at the hotel where the murder victim worked and of course the interfering old biddy turns out to be Jane Marple.
When Clithering learns she has a contribution to make, he is ecstatic.


‘Ye Gods and Little Fishes,’ said Sir Henry, ‘can it be? George, it’s my own particular, one and only, four-starred Pussy. The super Pussy of all old Pussies. And she has managed somehow to be at Medenham Wells, instead of peacefully at home in St Mary Mead, just at the right time to be mixed up in a murder. Once more a murder is announced—for the benefit and enjoyment of Miss Marple.’

Craddock's first impression of Miss Marple is that she is well past her prime.


Miss Jane Marple was very nearly, if not quite, as Craddock had pictured her. She was far more benignant than he had imagined and a good deal older. She seemed indeed very old. She had snow-white hair and a pink crinkled face and very soft innocent blue eyes, and she was heavily enmeshed in fleecy wool. Wool round her shoulders in the form of a lacy cape and wool that she was knitting and which turned out to be a baby’s shawl.

But of course, as always, Jane Marple's contribution to solving the case is invaluable.

As I've indicated in earlier reviews, I am very interested in Agatha Christie as a social commentator.  I draw your attention to a couple of passages about post-war Britain which has been flooded with refugees. Craddock points out how society has changed: from one where every body knew every body else, to one where identities are easily assumed:


And that, thought Craddock, was exactly what was oppressing him. He didn’t know. There were just faces and personalities and they were backed up by ration books and identity cards—nice neat identity cards with numbers on them, without photographs or fingerprints. Anybody who took the trouble could have a suitable identity card—and partly because of that, the subtler links that had held together English social rural life had fallen apart. In a town nobody expected to know his neighbour. In the country now nobody knew his neighbour either, though possibly he still thought he did…


After the last war, we went in for sex. Now it’s all frustration.

There are also a number of references to rationing, coupons, and the black market in stockings and luxury foods.

This is also the novel where Mitzi creates Delicious Death, a chocolate birthday cake, and a recipe for such a cake is added at the end of this edition using a recipe supplied by Jane Asher and created for the 120th birthday celebrations.

Kerrie - I've always thought Christie did a really effective job of giving readers a flavour for what wartime (and post-war) life was like. I'm glad you brought that point up here because it's something I like about this novel.

I really enjoyed this one as well.

This is one of my absolute favourites - nice to be reminded of how good a read it is.

I've just started reading through Agatha Christie from the beginning. Only on book two. It was fun to read your review and insights on this book. I think she's an amazing writer.