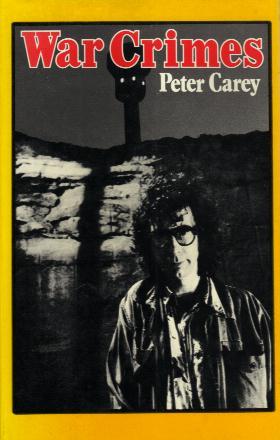 For many of my contributions this year to Pattinase's Friday's Forgotten Books
I am focussing on the books I read 20 years ago in 1992. By then my reading diet was almost exclusively crime fiction.

My choice this week is WAR CRIMES by Australian author Peter Carey. Published by University of Queensland Press in 1979, this was a collection of 13 short stories, described as bizarre, funny and chilling.
I read it towards the end of 1992.

It seems that if you have a first edition copy now you may be sitting on a little gold mine.

You may know of Peter Carey from his novels.

Kerrie - I hadn't heard he had a collection of stories. Thanks! Something I should look for...

I'm not at all familiar, but then again that's why I visit you, you keep me in the "know". Are you sitting on a gold mine?

Interesting to go back 20 years in time! I was only 15 then, so my taste was very much within the typical crime obsessive trajectory, of Agatha Christie/Ruth Rendell/Conan Doyle. Think I would have grown out of Nancy Drew by then!