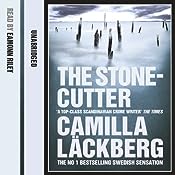 The remote resort of Fjällbacka has seen its share of tragedy, though perhaps none worse than that of the little girl found in a fisherman's net. But the post-mortem reveals that this is no case of accidental drowning….

Local detective Patrik Hedström has just become a father. It is his grim task to discover who could be behind the methodical murder of a child both he and his partner, Erica, knew well. He knows the real question - and answer - lies with why. What he does not know is how this case will reach into the dark heart of Fjällbacka and the town's past, and tear aside its idyllic façade, perhaps forever.

I haven't read anything by this author before and quite happily read THE STONE-CUTTER as a stand alone. It only occurred to me towards the end that it might be part of a series, as indeed it is. The series are police procedurals set the small seaside town of Fjallbacka, Sweden.

The opening hook of the story is the death of Sara, an 8 year old, the daughter of Patrik Hedstrom's wife's friend. The tragedy seems to become deeper when the police learn that Sara's death is in fact murder and there seems to be no lack of suspects including the girl's own father.

The plot is made all the more complex by the introduction of a historical thread. While this thread is actually essential to the story and to the eventual resolution of the murder, it does seem to take a long time to unfold.

The narrated version has a few consistency problems, first of all with pronunciation of names, and also with the differentiation between voices. The narrator seemed to me to at first decide to use a number of British accents, which felt a bit strange in a Swedish novel, and then to abandon that scheme.

Murder, evil, and damaged personalities lie at the heart of this novel. There is a twist at the end that I really didn't see coming.

I will be looking to read more from Camilla Lackberg.

Books available in the UK market - unfortunately it appears that only 2 (marked **) are currently available to US readers. There are in fact 12 books in Swedish.

Kerrie - I like this series very much so I'm glad you've highlighted it. Given what you've said about the audio version though, I think I'm very glad I read it rather than listened to it. Narration quality can make all the difference in the world.