For many of my contributions this year to Pattinase's Friday's Forgotten Books I am focussing on the books I read 20 years ago in 1992. By then my reading diet was almost exclusively crime fiction.

MURDER IN THE MEWS is a collection of four novellas that I read about this time in 1992.

It was first published in the UK by Collins Crime Club on 15 March 1937.  In the U.S., the book was published by Dodd, Mead and Company under the title Dead Man's Mirror in June 1937 with one story missing (The Incredible Theft)

The four novellas are 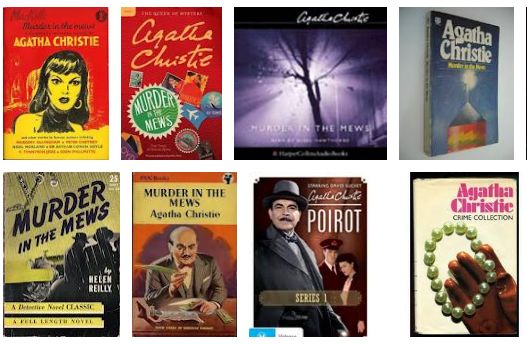 One of the fascinating things about titles that have been published many times are the very varied style of covers used.

The YouTube video below is extracted from the 1989 television production.

Kerrie - Nice choice for Forgotten Books. I've always liked that novella as it shows some interesting sides (I think) to Poirot's character and it's an interesting study of the housemates who feature in the story.