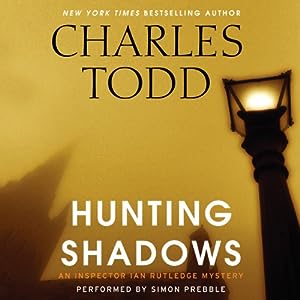 A dangerous case with ties leading back to the battlefields of World War I dredges up dark memories for Scotland Yard Inspector Ian Rutledge in Hunting Shadows, a gripping and atmospheric historical mystery set in 1920s England, from acclaimed New York Times best-selling author Charles Todd.

A society wedding at Ely Cathedral in Cambridgeshire becomes a crime scene when a man is murdered. After another body is found, the baffled local constabulary turns to Scotland Yard. Though the second crime had a witness, her description of the killer is so strange it's unbelievable.

Despite his experience, Inspector Ian Rutledge has few answers of his own. The victims are so different that there is no rhyme or reason to their deaths. Nothing logically seems to connect them - except the killer. As the investigation widens, a clear suspect emerges. But for Rutledge, the facts still don't add up, leaving him to question his own judgment.

In going over the details of the case, Rutledge is reminded of a dark episode he witnessed in the war. While the memory could lead him to the truth, it also raises a prickly dilemma. To stop a murderer, will the ethical detective choose to follow the letter - or the spirit - of the law?

It is a couple of years since I've caught up with this series, despite the best intentions of reading them all. HUNTING SHADOWS makes me want to read more.

However Ian Rutledge hasn't moved on very far in that time. The setting is 1920, he is still working on demand out of Scotland Yard, and still suffering from post-war stress. World War One is still raw in the memories of rural England, where so many young lads went off to war and either did not return or came back maimed in body and soul.

Rutledge comes from London to the Fens to solve a murder at Ely Cathedral. The expectation both by his boss in London and the local Inspector in charge is that it won't take long. On the face of it there are no connections between the first murder and the second, nor with the shooting that follows. But of course there are connections as Rutledge will eventually ferret out.

The plots in this series are so well constructed, and there is enough of Rutledge's continuing story to maintain the reader's interest too. There is a post-war flavour that comes out well, and some interesting characters and occupations, some of which no longer exist.

I've also reviewed
SEARCH THE DARK
A PALE HORSE
A TEST OF WILLS
4.5, A DUTY TO THE DEAD(A Bess Crawford novel)
4.7, A LONELY DEATH

Kerrie - I do like this Charles Todd series. And you've reminded me that I've not read one lately. Time to remedy that.