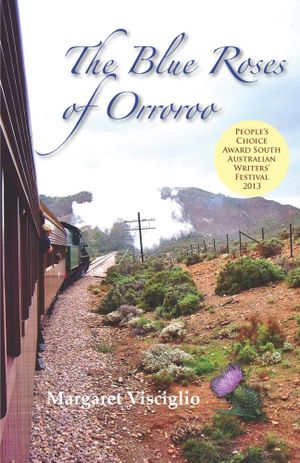 In the summer of 1928, the body of Michael Walsh is brought home to Norwood from Mount Gambier, where he died on a train. That night his wife, Rose, attacks his coffin with an axe. Rose's estranged daughter, Mary, returns for the funeral. Mother and daughter are reconciled but as Michael is buried, dark secrets are resurrected. The Blue Roses of Orroroo is a humorous account of rape, incest and Stolen Generations related by Rose Walsh, a not always reliable witness, as she strives to rescue her family from destitution and, fuelled by kerosene and roses, to restore her own self-esteem.

Blue Roses won the Three Day Novel Writing Race conducted by the Salisbury Writers' Festival in 2007. The novel was expanded and entered in the Amazon Breakthrough Novel Competition in 2009, reaching the semi-finals. One reviewer (USA) wrote, 'The historical setting is well researched and seamlessly presented. Although set in a small Australian town the themes are universal. Style-wise, this is above your average best-seller.' Another reviewer (Canada) said, 'Written with heart and humour. A book that dares to start with horse shit is going to be good.'

There is a little mystery embedded in THE BLUE ROSES but one that is really easily solved (and a crime has taken place).

But for me the fascinating part of the read is the depiction of life in South Australia on the brink of the Depression in 1929.  The story straddles both urban and rural life, in the period before cars were common conveyances, and electricity was not standard. The setting is a little older than me, but things had not changed so much by the time I was a child.

The story of how this novel came to be is an inspiring one for all who think they might have a book or a short story in them.