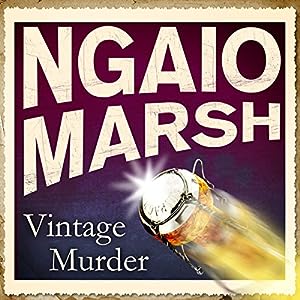 A touring theatre company in New Zealand forms the basis of one of Marsh’s most ambitious and innovative novels.

New Zealand theatrical manager Alfred Meyer wanted to celebrate his wife’s birthday in style. The piece de résistance would be the jeroboam of champagne which would descend gently into a nest of fern and coloured lights on the table, set up onstage after the performance.

But something went horribly wrong. Chief Detective Inspector Alleyn witnessed it himself. Was Meyer’s death the product of Maori superstitions? Or something much more down to earth?

The action takes place in 1936. Many of the characters talk about the impact of the previous world war, and there is a sense of another war to come.

Ngaio Marsh drew heavily on her theatrical background for this plot. Roderick Alleyn has come to New Zealand for a holiday, and finds himself travelling on a train with a British touring theatre company. He finds he actually knows two of the female actors. The manager tells everyone that someone has tried to push him off the train.

The company gets off the train and Alleyn stays with them and so is there when the murder takes place. Although he has been travelling incognito he joins forces with the local detectives to investigate the crime.

Marsh also uses this novel to talk extensively about Maori culture and the tensions between natives and whites. Roderick Alleyn is very much taken with New Zealand.

In this audio version, read by a very British actor, there is an attempt to give each character a very distinctive voice. I felt that sometimes it was a bit over the top, but in general was well done, because I really did get to "know" each character by the voice used.


I've also reviewed
A MAN LAY DEAD
TIED UP IN TINSEL
4.3, DIED IN THE WOOL
THE NURSING HOME MURDER
4.2, DEATH IN ECSTASY