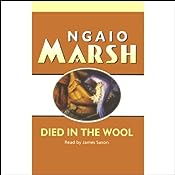 This week's contribution to Pattinase's Friday's Forgotten Books is a book I have just completed reading.

Blurb
One summer evening in 1942 Flossie Rubrick, MP, one of the most formidable women in New Zealand, goes to her husband's wool shed to rehearse a patriotic speech and disappears. Three weeks later she turns up at an auction, packed inside one of her own bales of wool and very, very dead.

My take:
As with COLOUR SCHEME (see mini-review below) Ngaio Marsh used World War II as the setting for DIED IN THE WOOL. Roderick Alleyn from Scotland Yard was in New Zealand as part of the war effort, seeking out fifth columnists and espionage undermining the war effort.
Mount Moon station on the South Island is being used by two young men as a base for developing a new anti-aircraft device, and the authorities believe that the blueprints have been leaked.

Marsh uses the setting as a country house, closed venue, mystery. There can only be a certain number of suspects, because of the isolation of the station. Alleyn arrives at Mount Moon over 18 months after Flossie Rubrick's murder and in fact after the death of her husband from illness.

One of the interesting ploys of the plot is that Alleyn assembles the main characters and gets them each to tell their opinions of the dead Flossie, who does not appear to have been a very nice character at all.

It was interesting to hear of the things that were concerning the characters (and by extension the author) late in the War. Flossie is very conscious that she must contribute to the war effort, although her offers of assistance to the War Cabinet in London have been repulsed. Three of the young people at Mount Moon station have already been "over there". The preoccupation with the possible presence of enemy agents is also interesting.

I thought there were a few things apart from the setting that dated the book. The style was a bit ponderous and the vocabulary contained words no longer in frequent use. The plot was very carefully crafted though and has worn well.

Mini-review COLOUR SCHEME, published 1943, my rating 4.2
COLOUR SCHEME    Believed by some to be her best novel, this classic by Ngaio Marsh is set in New Zealand during World War 2. Someone is assisting Germans to sink British ships off the coast of New Zealand and flashing lights on a nearby mountain are thought to be an enemy agent signalling a German boat or submarine. The setting is a run-down spa with boiling mud pools in the North Island near a Maori pa. This is an almost theatrical novel. Marsh makes extensive use of her knowledge of Maori customs and of course there is a murder, a victim lured into a boiling pool. Enter Roderick Alleyn on loan to the NZ government, searching for enemy agents.

I've been listening to more audio books lately. March is an underrated writer.

Kerrie: I LOVED this book! It's one of my very favorite Ngaio Marsh reads. Last year I read all of Marsh's books in one fell swoop. (I do that every now and then.) DIED IN THE WOOL was one of my top ten Marsh books for sure. And isn't that a GREAT title?