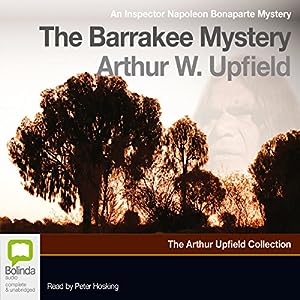 
Why was the redoubtable King Henry, an aborigine from Western Australia, killed during a thunderstorm in New South Wales? What was the feud that led to murder after nineteen long years had passed? And who was the woman who saw the murder and kept silent?

This first story of Inspector Napoleon Bonaparte, the half-aborigine detective, takes him to a sheep station in the Darling River bush country where he encounters those problems he understands so well... mixed blood and divided loyalties.

PLEASE NOTE: Part of the appeal of Arthur Upfield's stories lies in their authentic portrayal of many aspects of outback Australian life in the 1930s and through into the 1950s. These books reflect and depict the attitudes and ways of speech of that era particularly with regard to Aborigines and to women. In reproducing this book the publisher does not endorse the attitudes or opinions they express.

It would be easy to focus in a review of  THE BARRAKEE MYSTERY on the politically incorrect (by today's standards anyway) attitudes and terminology. But as the publisher says, they reflected the attitudes of the times.

Peter Hosking does a wonderful job of the narration and that allowed me to reflect on other things: the descriptions of the outback and the toughness required of those who chose to live there. I was struck also by how the novel reflected Australia's bush heritage.

Born in England in 1890, Upfield moved to Australia in 1911 and fought with the Australian military during the First World War. Following his war service, he travelled extensively throughout Australia, obtaining a knowledge of Australian Aboriginal culture that he would later use in his written works. In addition to writing detective fiction, Upfield was a member of the Australian Geological Society and was involved in numerous scientific expeditions. (Wikipedia)

The bush heritage that I am reminded of were the works of Banjo Paterson and particularly the stories of Henry Lawson, even SUCH IS LIFE by Joseph Furphy.  In later novels Upfield wasn't as expansive in his descriptions of the country, and focussed more on detective/crime elements, but there are a lot of mini-stories in THE BARRAKEE MYSTERY. There is a mystery element in the novel too, well structured, but not really all that difficult to solve.

Bony reminds me a little of Hercules Poirot: not only does he believe in his own superior detection skills, but he also dispenses his own form of justice.