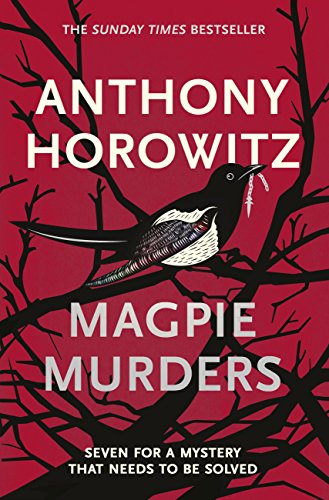 
When editor Susan Ryeland is given the tattered manuscript of Alan Conway's latest novel, she has little idea it will change her life. She's worked with the revered crime writer for years and his detective, Atticus Pund, is renowned for solving crimes in the sleepy English villages of the 1950s. As Susan knows only too well, vintage crime sells handsomely. It's just a shame that it means dealing with an author like Alan Conway...

But Conway's latest tale of murder at Pye Hall is not quite what it seems. Yes, there are dead bodies and a host of intriguing suspects, but hidden in the pages of the manuscript there lies another story: a tale written between the very words on the page, telling of real-life jealousy, greed, ruthless ambition and murder.

MAGPIE MURDERS is one of those "peeling an onion" books: There are two main stories, one contained inside the other, but at the same time Anthony Horowitz pays tribute to those successful writers of cozies, particularly those who have managed to sustain a credible detective over a number of titles. Here is his take on an Agatha Christie-style book, and the reader can't help but recognise that Atticus Pund has a lot in common with Hercule Poirot.

Both stories have a time of denouement: we eventually find out who was responsible for the murders in Alan Conway's novel, and then the finale of the story in which editor Susan Ryeland in the central character.

So the book also contains some interesting reflections on writing cozies, why readers like them, why the television public can't get enough of murder, and how writers often come to hate their main protagonist, even when killing them off is the equivalent to killing the golden goose. There is even a passage when the editor Susan Ryeland wonders how those protagonists, among them Morse, Rebus, Poirot, Wimsey, Marple, Poirot, felt when they realised their time was coming to an end.

So there was a lot to like about this book, a lot to think about, although I found it slow going at the beginning, and it is quite long.

A warning for Kindle users: on my paper-white kindle, the book that Susan Ryeland is reading, Alan Conway's Magpie Murders, is rendered as a "softer" print, which I found quite hard to read. It is almost as if the Kindle is trying to display it as grey. It wasn't something I noticed when reading on the iPad app, but there various parts of the book were rendered in a different font, indicating a different "voice", a different part of the book.

About the author (from Amazon)

Anthony Horowitz's life might have been copied from the pages of Charles Dickens or the Brothers Grimm. Born in 1956 in Stanmore, Middlesex, to a family of wealth and status, Anthony was raised by nannies, surrounded by servants and chauffeurs. His father, a wealthy businessman, was, says Mr. Horowitz, "a fixer for Harold Wilson." What that means exactly is unclear — "My father was a very secretive man," he says— so an aura of suspicion and mystery surrounds both the word and the man. As unlikely as it might seem, Anthony's father, threatened with bankruptcy, withdrew all of his money from Swiss bank accounts in Zurich and deposited it in another account under a false name and then promptly died. His mother searched unsuccessfully for years in attempt to find the money, but it was never found. That too shaped Anthony's view of things. Today he says, "I think the only thing to do with money is spend it." His mother, whom he adored, eccentrically gave him a human skull for his 13th birthday. His grandmother, another Dickensian character, was mean-spirited and malevolent, a destructive force in his life. She was, he says, "a truly evil person", his first and worst arch villain. "My sister and I danced on her grave when she died," he now recalls.

A miserably unhappy and overweight child, Anthony had nowhere to turn for solace. "Family meals," he recalls, "had calories running into the thousands&. I was an astoundingly large, round child&." At the age of eight he was sent off to boarding school, a standard practice of the times and class in which he was raised. While being away from home came as an enormous relief, the school itself, Orley Farm, was a grand guignol horror with a headmaster who flogged the boys till they bled. "Once the headmaster told me to stand up in assembly and in front of the whole school said, 'This boy is so stupid he will not be coming to Christmas games tomorrow.' I have never totally recovered." To relieve his misery and that of the other boys, he not unsurprisingly made up tales of astounding revenge and retribution.

Anthony Horowitz is perhaps the busiest writer in England. He has been writing since the age of eight, and professionally since the age of twenty. He writes in a comfortable shed in his garden for up to ten hours per day. In addition to the highly successful Alex Rider books, he has also written episodes of several popular TV crime series, including Poirot, Murder in Mind, Midsomer Murders and Murder Most Horrid. He has written a television series Foyle's War, which recently aired in the United States, and he has written the libretto of a Broadway musical adapted from Dr. Seuss's book, The 5,000 Fingers of Dr. T. His film script The Gathering has just finished production. And&oh yes&there are more Alex Rider novels in the works. Anthony has also written the Diamond Brothers series.

Very nice overview of Anthony Horowitz. I never knew all that about him. thanks, Kerrie

I'm intrigued by what I've read about this one - even though I still think of him as one of my son's favourite authors, not aimed a my age group.