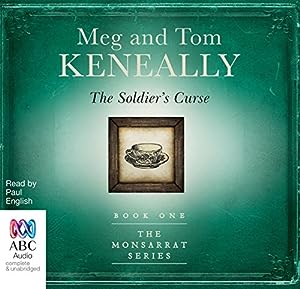 A fast-paced, witty and gripping historical crime series from Tom Keneally and his eldest daughter, Meg.

In the Port Macquarie penal settlement for second offenders, at the edge of the known world, gentleman convict Hugh Monsarrat hungers for freedom. Originally transported for forging documents passing himself off as a lawyer, he is now the trusted clerk of the settlement's commandant.

His position has certain advantages, such as being able to spend time in the Government House kitchen, being supplied with outstanding cups of tea by housekeeper Hannah Mulrooney, who, despite being illiterate, is his most intelligent companion.

Not long after the commandant heads off in search of a rumoured river, his beautiful wife, Honora, falls ill with a sickness the doctor is unable to identify. When Honora dies, it becomes clear she has been slowly poisoned.

Monsarrat and Mrs Mulrooney suspect the commandant's second-in-command, Captain Diamond, a cruel man who shares history with Honora. Then Diamond has Mrs Mulrooney arrested for the murder. Knowing his friend will hang if she is tried, Monsarrat knows he must find the real killer. And so begins The Monsarrat Series.

This tale is fiction, set in an Australian penal settlement north of Sydney in 1825. It is extremely well read and the voice characterisation is excellent. However while it is fiction, the historical facts ring true.

The central character Hugh Monsarrat has known the freedom of being a ticket-of-leave man, but lost his ticket when he was found to have left his designated district. He is a victim of the British class system which excluded him from becoming an accredited lawyer in London. He was transported to Australia for forging documents and for passing himself off as a lawyer.

The characters of Monserrat and the other main characters in the story are convincingly drawn. The story felt a bit slow to begin with but gathered pace as more plot strands were introduced.