Review: THE GIRLS SHE LEFT BEHIND, Sarah Graves 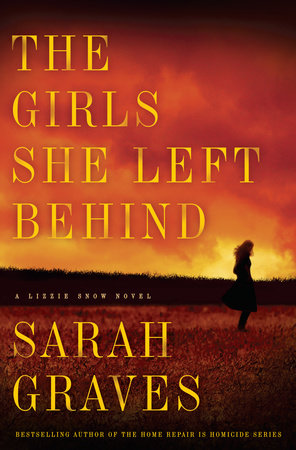 Sure to thrill readers of Jenny Milchman, Linda Castillo, and Lisa Gardner, The Girls She Left Behind marks the return of ex–Boston homicide detective Lizzie Snow, the new sheriff’s deputy in Maine’s Great North Woods.

For Lizzie Snow, the ice and snow of her first punishing North Woods winter are dreadful enough. But near the small town of Bearkill a stubborn forest fire now rages out of control, and as embers swirl dangerously in the smoke-filled air, a teenage girl with a history of running away has dropped out of sight again. The locals and the law both think Tara Wylie is up to her old tricks—until her mother receives a terrifying text message.

Equally disturbing: Henry Gemerle—a kidnapper and rapist who once held three girls prisoner for fifteen years—has escaped, and may be lurking in Bearkill. As the fire closes in, Lizzie teams up with her boss, Sheriff Cody Chevrier, and state cop Dylan Hudson to search for the missing girl and the wily fugitive. But they’re blocked by Tara’s mother, a frustrating teller of needless lies and keeper of dark, incomprehensible secrets.

Following a trail of grisly clues—a bloodstained motel room, a makeshift coffin in a shallow grave—Lizzie is drawn ever closer to the flames in her race to save an innocent and corner a monster. Someone else also wants to find Tara Wylie and Henry Gemerle, though, for reasons that have nothing to do with mercy or justice. And when they all meet, the inferno threatening Bearkill will pale in comparison to the hell that’s about to break loose.

Lizzie Snow has recently moved from Boston to the rural area of Bearkill and she is not sure that she is going to stay. She seems to be having difficulty in settling in.

The novel begins with a Prologue that describes how two girls are abducted after a local dance. One of the girls, Jane, eventually escapes, believing her friend Cam is dead. And then she does her very best to forget everything. The main action of the novel takes place 15 years later when three women  who have been imprisoned by her abductor are released from a cellar. On television footage Jane recognises Cam among those released.

Meanwhile Lizzie Snow is investigating the disappearance of 14 year old Tara Wylie. Her mother says she has gone off like this before, but there are aspects that are making her think that Tara has come to harm.

This main story is told by several narrators with sometimes only bare clues about who is talking. It also often involves several time frames and more than once I was confused about the sequence of events. For the reader there are mysteries to be solved and in the background is the threat of summer wild fires.

About the author
Sarah Graves lives with her husband in Eastport, Maine, one remote rural road away from the Allagash wilderness territory and the Great North Woods. She is the bestselling author of the Home Repair Is Homicide series, as well as two novels featuring Lizzie Snow.