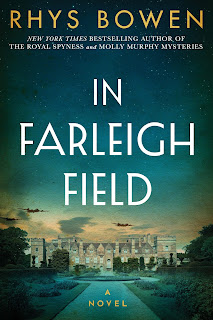 Farleigh Place is removed from the war by more than just miles.
While bombs rain down on London just an hour away, life goes on as usual at this Downton Abbey-like estate in the countryside.
Hampered only by a skeletal wartime staff, a dwindling supply of meat coupons, and an army regiment that's taken up residence at the big house, Farleigh is almost too idyllic to be real—until one night, when a soldier with a failed parachute falls to his death on the grounds, and the war literally hits home for Lord Westerham and his five daughters.

In Bowen's latest page-turner, her fictional storyline is rooted in historical truth. The pro-German societies referenced in this novel were known to have existed in England in the early days of the war. Some of the most dangerous were composed primarily of aristocrats — and there are plenty of aristocrats in Farleigh. So when the dead parachutist, carrying only a photograph, is presumed to be a German spy sent to deliver a message to someone in the vicinity of Farleigh Field, the neighborhood’s most powerful and wealthy aren’t ruled out as targets of suspicion. Ben Cresswell, an M15 operative and son of the local vicar, is dispatched to find the traitor in their midst. And though this quiet bucolic region may seem like an unlikely place to harbor a sympathizer, the area’s black marketeers, arrogant pragmatists, and foreign refugees also raise concerns.

With the help of his lifelong friend and secret love, Lady Pamela — herself a civil servant who cracks German codes at Bletchley Park — Ben investigates for spies and sympathizers. When he learns of The Ring, a secret society that wants to depose the king and make peace with Germany, he can hardly believe it's real. Can Ben and Pamela infiltrate The Ring? And can Ben find out what the photograph means in time to stop the crisis that could bring Britain to its knees?

Despite the fact that it is now over 70 years since the end of World War II, "behind-the-scenes" glimpses of what was going on during the war make popular reading, whether fact or fictional.

The setting of IN FARLEIGH FIELD is England, May and June 1941. The war could go either way, and already it has taken a great toll on both sides. Many of those living in England believe that if it ends soon, there will be only one possible winner, so resistance and alertness is the key.  Farleigh Place, Lord Westerham's family seat, has already become the base of the Royal West Kents. Unknown to Lord Westerham two of his daughters are already significantly involved in the war effort.

What I liked about this novel was not only the attempt to get the history and the setting right, but the quite believable story of an attempt to bring England to its knees with one or two catastrophic events. The economic and social dislocation caused by the war is well described, supported by a credible cast of characters. Very good reading, particularly if you enjoy historical crime fiction.

About the author
Rhys Bowen is the New York Times Bestselling Author of the Royal Spyness Series, Molly Murphy Mysteries, and Constable Evans. She has won the Agatha Best Novel Award and has been nominated for the Edgar Best Novel. Rhys’s titles have received rave reviews around the globe.
Read more

Thanks for the review, hadn't heard about this one, and as I've loved her other series will definitely want to read it.