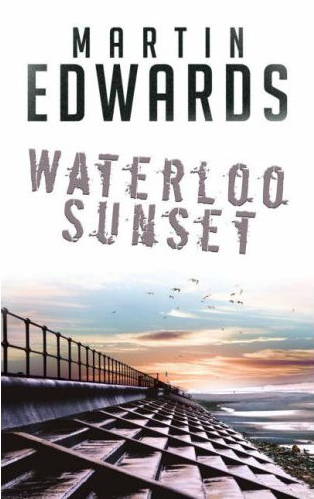 Crusoe and Devlin, Liverpool solicitors, have only just moved into their new premises in John Newton House, when the note arrives announcing Harry's sudden death in five days' time, on Midsummer's Eve.

In Harry's fertile imagination there is no lack of suspects, but then again, perhaps it is a joke. Harry's partner Jim Crusoe is inclined to think it is. A throatily whispered message on the answering machine at home is enough to convince Harry that someone really has it in for him.

Harry's past seems to be cluttered with people less than satisfied with his services. First of all there is Tom Gunter who has anger management issues, and Aled Borth who is convinced his mother was murdered for her money by the doctor in charge of the nursing home in which she died, and then Juliet May, once a lover, but now the ex-wife of Casper May, the owner of John Newton House.

On the second day of Harry's wait for his impending death, Liverpool is gripped by the horror of a possible serial killer. For the second time, the remains of a young woman has been found on a beach near Liverpool. Rumours are suggesting there may be connections.

Well, that's all I'm going to reveal of the story of this cleverly constructed mystery. Although this is the 8th of Martin's Edwards Harry Devlin series, it is nine years since Harry had an outing, and a lot of water has passed under the bridge since his last. I've never come across Harry before although I have read a couple of titles in the Lake District Mysteries. I think the earlier novels in the series will be worth looking for.

I did like the way WATERLOO SUNSET was constructed. There was good tension between the serial killer strand, which rather inevitably Harry Devlin becomes involved in, and Harry's own quest to find out who is threatening him. I liked also the characters who populate this story, particularly Harry himself, Gina Paget, and Amazing Grace.

Earlier this year I reported that Edwards had won a Gold Dagger Short Story Award for "The Bookbinder's Apprentice".

My earlier reviews:
THE COFFIN TRAIL:
Oxford historian Daniel Kind and partner Miranda make a spur of the moment decision to give up their city life styles and move to Tarn Fold in the Lakes District. The cottage they buy near the coffin trail has a history for Daniel: it is where a boyhood friend lived. His friend was also widely thought to have been the culprit in an unsolved murder. When DCI Hannah Scarlett's new team begins its cold case review, including a review of this particular case, locals are none too happy. This is a well structured story, and seems likely to be the beginning of a series.

Read more about everything Martin is involved in at his site http://www.martinedwardsbooks.com/index.htm
Follow his blog at http://www.doyouwriteunderyourownname.blogspot.com/

Good review, Kerrie. I really enjoyed this book, too. I'm looking forward to his next, whether it is Lake District or Harry Devlin (or other!).