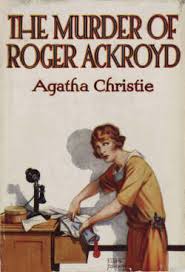 Roger Ackroyd is a man of nearly fifty years of age, the life and soul of the little Sussex village of King's Abbot. Hercule Poirot, retired Belgian detective, has recently taken up a rental cottage in the village and is devoting his time and little grey cells to country pursuits such as growing marrows. He imagines that people don't really know who he is but his reputation has preceded him. When Roger Ackroyd is murdered in what appears to be a classic locked room mystery, Poirot jumps at the invitation to come out of retirement to participate in the investigation.

On the face of it, it is an open and shut case. At least the local police inspector, Inspector Davis, thinks so. Ralph Paton, Ackroyd's adopted heir has recently argued with Ackroyd and now has disappeared. Davis is all for issuing a warrant for Paton's arrest but Ackroyd's niece Flora who is engaged to Paton insists on the involvement of M. Poirot who happens to be a neighbour.

There are some interesting themes in this novel.
Some people have said that THE MURDER OF ROGER ACKROYD is Christie's best novel. The Wikipedia entry says : It is one of Christie's best known and most controversial novels, its innovative twist ending having a significant impact on the genre.

In fact I didn't find it all that easy to read. It seemed chock full of information and facts, as if Christie was trying to pour everything into my brain, to see if I could sift the chaff from the wheat, and come up with the answer. For me also the novel is an illustration of my conviction that she doesn't always play fair with the reader. You can follow this idea up here.

If you are interested in the TV version with David Suchet as Hercule Poirot, here are the opening scenes, via YouTube.
Once you have viewed it you will find subsequent "episodes" are available.
Be warned though, there are significant differences between the original book and the TV version.

Very helpful background info here. I have been watching the David Suchet adaptations for years, but last week's read of Roger Ackroyd was my first time with one of Christie's books. Mysteries without Hastings (and Japp) always make me sad, but I think the extra special twist ending on this one is probably worth it. (My totally spoiler-y review will be posting tomorrow morning.)

I'll look forward to hearing about it Nicole