This contribution to Pattinase's Friday's Forgotten Books is a book I read in 1994. It was published in 1991 and is the second book in the Mitchell and Markby Village series. The series reached #15 in 2004. 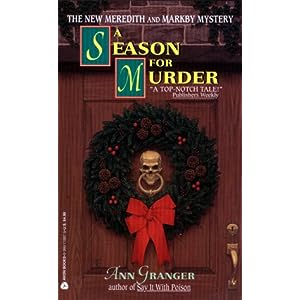 When Harriet dies from a fall during a Boxing Day meet, animal rights activist Simon Pardy is blamed because his banner spooked the steed. The autopsy, however, discloses that Harriet , known to have abjured drugs and medicines, died full of tranquilizers and alcohol. Alan draws Meredith into the investigation, which is complicated by the murder of the unlikable Pardy, an attack on Harriet's vengeance-seeking executor cousin and a plethora of the horsewoman's former lovers. As Meredith uncovers old local secrets, she also tries to sort out her highly ambiguous feelings for Alan. Granger delicately probes human relationships in this top-notch tale.

About the author
Patricia Ann Granger (born 1939) is a British crime writer. Granger was born in Portsmouth, England. She took a Modern Languages degree at the University of London, taught English for a year in France, but eventually went to work in the visa sections of British consulates and embassies in Yugoslavia, Czechoslovakia and Austria. She married a work colleague in the foreign service and went with him to Zambia and Germany before returning to live in England with their two children. Her first novels were historical romances published under the nom de plume Ann Hulme. After her return to England, her first crime novel, Say It With Poison, was published in 1991.

I've read several in this series and thought they were quite good!