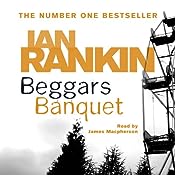 Over the years, Ian Rankin has amassed an incredible portfolio of short stories. Published in crime magazines, composed for events, broadcast on radio, they all share the best qualities of his phenomenally popular Rebus novels. Ranging from the macabre ('The Hanged Man') to the unfortunate ('The Only True Comedian') right back to the sinister ('Someone Got To Eddie') they all bear the hallmark of great crime writing. Of even more interest to his many fans, Ian includes seven Inspector Rebus stories in this collection...
Listen to an audio sample

From Wikipedia - a list of the stories is available there
Beggars Banquet is the second collection of short stories by crime writer Ian Rankin.
It features 21 stories written between 1991 and 2000.
The collection also includes the novella Death Is Not the End which was later expanded into the novel Dead Souls.

The story Herbert in Motion is concerned with the theft of works of art from the storage facilities of a major Gallery and their replacement with high quality forgeries to avoid detection of the crime, which was also the basis for the 2008 novel Doors Open

Ian Rankin's short stories always illustrate what a superb story teller he really is, and what a variety of issues and ideas interest him. The short stories collected into BEGGARS BANQUET have also recently been included in a new volume called THE COMPLETE SHORT STORIES.

I must admit the ones I most enjoyed were the Rebus ones, and the ones I disliked most were the Walter Scott ones.

The story Herbert in Motion won a CWA Short Dagger in 1996.

James Macpherson (whom you will remember from Taggart) does an excellent job of narration, if sometimes challenging when he implements a broad Scottish brogue.
In general each of the stories is approximately 20 mins long.

Kerrie - Thanks for the reminder that I must read this. I like short stories very much and I like Rankin's storytelling as well.