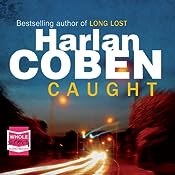 17 year-old Haley McWaid is a good girl, the pride of her suburban New Jersey family, captain of the lacrosse team, headed off to college next year with all the hopes and dreams her doting parents can pin on her. Which is why, when her mother wakes one morning to find that Haley never came home the night before, and three months quickly pass without word from the girl, the community assumes the worst.

Wendy Tynes is a reporter on a mission, to identify and bring down sexual predators via elaborate—and nationally televised—sting operations. Working with local police on her news program Caught in the Act, Wendy and her team have publicly shamed dozens of men by the time she encounters her latest target. Dan Mercer is a social worker known as a friend to troubled teens, but his story soon becomes more complicated than Wendy could have imagined.

In a novel that challenges as much as it thrills, filled with the astonishing tension and unseen suburban machinations that have become Coben’s trademark, Caught tells the story of a missing girl, the community stunned by her loss, the predator who may have taken her, and the reporter who suddenly realizes she can’t trust her own instincts about this case—or the motives of the people around her.
Read an extract, listen to a sample, here.

When Wendy Tynes investigates Dan Mercer's background her curiosity is aroused by the fact that he is one of a Harvard group of friends who have all had a disastrous career collapse in the past 12 months. The evidence against Dan Mercer looks irrefutable, but what are the chances that he has been set up, that in fact he is innocent? When he goes into hiding after being acquitted on a technicality, Wendy's investigation, undertaken with the aim of proving Dan's guilt, takes her back 20 years when a prank changed lives forever.

The plot twists and turns, and several times Wendy thinks she has nailed the real facts only to find there is yet another rabbit hole to investigate.

There's quite a cast of characters and narrator Christopher Evan Welch does an excellent job in helping us differentiate between them.

Another review to check: Roz Kaveney in the Independent.

My mini review of THE WOODS By Harlan Coben in 2007, rated at 5
Paul Copeland, county prosecutor for Essex in New Jersey, has had an emotional roller coaster of a life. Right now he is the only immediate family his six year old daughter Cara has. Her mother died of cancer 5 years ago. Paul comes from Russian immigrant parents and recently his father died. But Paul's family was shattered twenty years ago when he and his sister Camille were on a holiday camp and Camille disappeared. Camille and three friends went into the woods near the camp at night. Two were found murdered but Camille and one of the boys were never found. Paul remembers that his father used to spend time searching the woods, digging for his sister's body. Now Paul recognises a murder victim as the boy who disappeared. So where is his sister? Is she still alive? An excellent read, that keeps you guessing until the final pages.

I listened to one Harlan Coben book and loved it. I really need to try more of his work.

I can't get into audio. During my Thrill Week HarlanC was recommended numerous times, I look forward to trying him before the year is over.

I can't get into audio either, but I liked this book (in an undemanding kind of way) when I read it in print format: http://petronatwo.wordpress.com/2010/05/03/book-review-caught-by-harlan-coben/

I liked this one quite a but even if it wasn't my favorite Coben book.