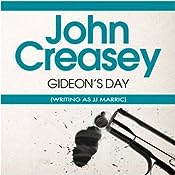 London is faced with the murder of a little girl and a policeman's murder. George Gideon, while trying to bring these killers to justice, has to deal with a criminal gang that is after one of it's own.

One of the most senior officers within Scotland Yard, George Gideon's crime-solving abilities are in the finest traditions of London's world-famous police headquarters. His analytical brain and sense of fairness is respected by colleagues and villains alike.

If you'd like to read some of the book click on the cover image to the right.

GIDEON'S DAY, published under the pseudonym of J.J. Marric, really was the forerunner of those police procedurals which have become so popular in recent decades. It precedes by 10 years the works of Maj Sjowall and Per Wahloo in the Martin Beck series.
There were eventually 22 titles in the Gideon series 1955-1978 (2 of them posthumously).

What strikes you as you listen is how busy Gideon's day actually was, so many things happened. George Gideon was a pretty fiery character who demanded high standards of himself and all who worked with him. His day begins with him dressing down a subordinate whom he has discovered is taking bribes from a London drug peddler. Within the hour the man has been killed in a driving hit-and-run.

I'm looking forward to following this up with GIDEON'S NIGHT and GIDEON'S WEEK.

I read the Gideon books years ago and loved them. How good to be reminded of a great series of books.

I've loved every one of the Gideon books I've read but one--Gideon's Power. I read that one in August of 2010. I've got Gideon's Month on the schedule for a challenge in 2012.