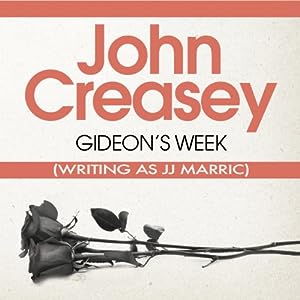 No week in the life of Commander Gideon of Scotland Yard could be entirely uneventful. However, a mass escape from Millways Gaol made this a particularly harassing week. Ruby Benson set up her killer husband and it's up to Gideon to protect the woman from her bloodthirsty spouse's vendetta--or die trying.

I thought this was a more accomplished piece of writing than GIDEON'S DAY,  the first in the series, which I listened to and reviewed last week. The hunt for the escapees from Millways Gaol holds it together nicely for the whole book.

Gideon and his wife Kate have overcome some emotional hurdles, a friend of his daughter Pru approaches Gideon at work when her brother is accused on murder, and we get a better glimpse of the personal lives of Gideon and his offsider Lemaitre.

George Gideon is really the fore-runner of Ruth Rendell's Reg Wexford. He is so well described I can see him in my mind's eye. He is a big man, someone all his colleagues and those he commands look up to, thoroughly nice, with a photographic memory and the ability to make snap decisions.

Thanks for writing about Gideon. You make me want to go back and read them again. I suspect they can be had in ebooks now. I hope so. (I don't drive long distances anymore, so I don't listen to many audio books).

I have to learn the secret.