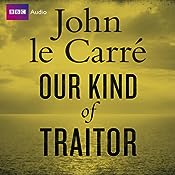 Perry and Gail are idealistic and very much in love when they splurge on a tennis vacation at a posh beach resort in Antigua. But the charm begins to pall when a big-time Russian money launderer enlists their help to defect.
In exchange for amnesty, Dima is ready to rat out his vory (Russian criminal brotherhood) compatriots and expose corruption throughout the so-called legitimate financial and political worlds.
Soon, the guileless couple find themselves pawns in a deadly endgame whose outcome will be determined by the victor of the British Secret Service's ruthless internecine battles.

What could possibly go wrong with listening to an audio book read by the author himself?
Well, listening to an abridged version of OUR KIND OF TRAITOR has just about cured me of listening to any more abridged books. My listening companion and I were constantly struggling to make sense of the action.

I've checked the length of this version (5 hours) with the unabridged one read by Michael Jayston in 11 hours 23 mins. That makes the abridged version about 44% of the length of the original. It is pretty obvious that descriptive passages, minor characters, and "minor" events were edited out. That explains the continuity that we felt was missing. Characters turn up whom the listener hasn't heard of before, and we didn't feel that we really got to know the characters we did meet. The details edited out might have helped us make more sense of the action.

"Your fault" you might respond - you were the one who chose to listen to an abridgement. In my defence, I thought the fact that the author himself was narrating was an insurance that it would be ok. Not so. Le Carre does an excellent job (I haven't found other examples of his narration) with a terrific range of voices. The problem clearly lies in what the abridgement left out.

I listen to a lot of audio books and most of the are abridges in some way. It looks like the editing was badly done in this one though.

I find it fascintating that the author thinks there was so much in his own book that could be cut out...I would have to agree with him as I listened to the unabridged vesion (read by someone else) and thought it was pretty woeful...lots of boring bits

Sorry you did not like this one. I think he's gone off in recent years. Unfortunately I bought this book (print version) for Prof P for xmas 2010 before I saw Bernadette's review, but he hasn't read it (yet?!). Maybe I should just sneak it down to the charity shop before he does.

Kerrie - Sorry to hear you were disappointed in this version. It is indeed odd that the author himself thought that things could productively be abridged from the story. Hmmmm..... Yeah maybe I'll give this one a miss although I've liked a lot of le Carré's work.

I am not sure why Le Carre decided to narrate the abridged version himself. He is in fact very good. Lots of tonal range and quite good at accents although his Australian accent sounds more like South African.

Maxine the Prof might still like it. Le Carre feels a bit like an intellectual exercise to me and after reading Bernadette's review of the unabridged audio I am not sure I would have liked that much better