Review: MURDER AT THE SAVOY, Maj Sjöwall & Per Wahlöö - audio 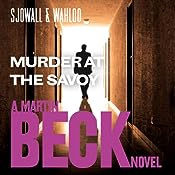 When Viktor Palmgren, a powerful Swedish industrialist, is shot during his after-dinner speech in the luxurious Hotel Savoy, it sends a shiver down the spine of the international money markets and puts the tiny town of Malmö on edge.
No one can identify the gunman when Martin Beck takes over the scene and finds a web so despicable that it's hard to imagine who wouldn't want Palmgren dead.

The introduction to this audio book (and the Kindle version) was written by Michael Carlson, book reviewer and film critic. In it he talks about what ground breakers Maj Sjöwall & Per Wahlöö were, how they paved the way not only for today's Scandinavian writers but how they changed the conventions and direction of crime fiction forever, particularly that of the police procedural.

The thing that strikes you about MURDER AT THE SAVOY is how much detail there is, whether it is description of the main players, police procedures, settings, and interview transcripts.

In the introduction Carlson alerts you to look out for reflection of the authors' socialist views as well as how Sweden's economy is being manipulated by industrialists and magnates. Martin Beck is told to tread carefully in this case because Viktor Palmgren is so powerful, influential with members of the government. There is pressure on Beck and his team to not only catch the murderer quickly but also to avoid releasing any details that might reflect badly on the Swedish government.

In the long run, when the murderer is charged Beck feels that while justice appears to have been served the real criminals have remained free.

Other reviews on this blog

I just picked this book up late last year. It's on the long TBR list....but I've got so many ahead of it. I look forward to reading it, especially after your review.

You keep making me think I need to go back and read this series again. I enjoyed it the first time around. Thanks.