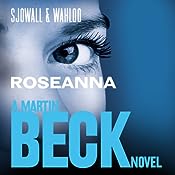 On a July afternoon, the body of a young woman is dredged from Sweden's beautiful Lake Vättern. Three months later, all that Police Inspector Martin Beck knows is that her name is Roseanna, that she came from Lincoln, Nebraska, and that she could have been strangled by any one of 85 people.

As the melancholic Beck narrows down the list of likely suspects, he is drawn increasingly to the enigma of the victim, a free-spirited traveller with a penchant for the casual sexual encounter, and to the psychopathology of a murderer with a distinctive - indeed, terrifying - sense of propriety.

With its authentically rendered settings, vividly realized characters, and command over the intricately interwoven details of police detection, Roseanna is a masterpiece of suspense and sadness.

I have been promising myself to read this, the first in the Martin Beck series. I have read a number of the series (see the list below) and enjoyed them. Fifty six years on from the publication of ROSEANNA, it would be easy to dismiss the signals in the book that crime fiction was embarking on a new style of police procedural, one that not only focussed on the crime committed but also on the way the policeman felt about his job, the way the investigation gnawed at the detective's consciousness,  affected his family life, and even how well he felt.

The introduction to both the Audible and Kindle versions is the same, written by Henning Mankell who pays tribute to how the authors thought they could use "crime novels to form the framework for stories containing social criticism. ... They wanted to use crime and criminal investigations as a mirror of Swedish society... Their intent was never to write crime stories as a form of entertainment."

In ROSEANNA Maj Sjowall and Per Wahloo experimented with a number of formats. Parts of the novel are simply narrative while in other sections we have verbatim transcripts of interview.


When Maj Sjöwall and her partner Per Wahlöö started writing the Martin Beck detective series in Sweden in the 60s, they little realised that it would change the way we think about policemen for ever.

Tom Weiner does an excellent job of the audio version. (Just a personal anecdote - about two chapters before the end, my iPod ceased to work, and I was forced to read the last two chapters on my Kindle.)

Kerrie - An excellent review - thanks! I really am glad that you liked it as much as you did. It really is one of those books that you can call "groundbreaking," isn't it?

I've not read any of these books but you make me want to try them out. I quite fancy the audio version too. I'm going to look on Amazon now as I have a fair bit of driving to do over Christmas.

Thanks for the post. You just reminded me to read more of their wonderful series.

I put one book on library reserve, and hope I can read it over the holidays.

I almost hate to read more of them, as there will be fewer to anticipate.

I am glad you liked Roseanna. I think the whole series is fine and deserves to be read and remembered by any lover of crime fiction, but to me Roseanna will always be the most memorable of the series. I read and forget more books than I care to admit as soon as I put them down, but Martin Beck´s fascination with his victim is so memorable.

Thanks. I've been promising myself I'd go back and read these again in order. I thought they were really good reading the first time. (A long time ago now.)

For those who haven't tried the Martin Beck books yet, I recommend the them.

Highly recommend "Murder at the Savoy." A great read. Like "Roseanna," it takes place in July and features wonderful settings.
But as I recall, its neither as particulary sad or suspensful as "Roseanna." More of a fun summer read, if you can say that about a Martin Beck book.