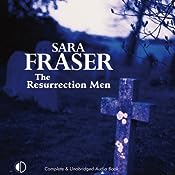 It is 1826, and in the town of Redditch in Worcestershire, Thomas Potts, reluctant Parish Constable, battles single-handedly to keep the peace and control crime.

With the notorious "Needle Pointers" up in arms at the news of a cut in their rate of pay, and a mysterious criminal gang, known as the "Rippling Boys", robbing, murdering and body-snatching with impunity, gentle, timid Tom has his work cut out.

At the same time he deals with the daily, unreasonable demands of his shrewish, bedridden mother and seeks out every possible opportunity for courting the pretty Amy Danks.
Unpaid, overworked and derided by the townspeople, Tom must now risk his life to bring the "Rippling Boys" to justice...

Peter Wickham does a wonderful job of the narration of this book and I particularly liked the shrewish voice of Tom's mother.

Several historical issues are raised in this novel: the extent of grave robbing and the selling of "fresh" corpses to hospitals and the like; the hazards of needle making for the woollen mills, a topic I had never given much thought to; the fact that parish constables like Tom Potts were under the control of the Parish council, were poorly paid, and thinly stretched; the lack of procedures that we now take for granted in detection of crimes.

I guess the latter is pretty obvious when you think about it, but Tom is dabbling in finger printing and teaching himself to perfect the technique and to recognise individual palm and finger prints.
According to Wikipedia a Czech physiologist and professor of anatomy at the University of Breslau, published a thesis in 1823 discussing 9 fingerprint patterns, but he did not mention any possibility of using fingerprints to identify people. Tom finds finger and palm prints fascinating and successfully uses them to identify suspects. Similarly he makes sketches and measurements of foot prints for later comparisons.

As my listening partner remarked, we are already familiar with some of this historical background, but placing it against a crime fiction story just makes it seem more real somehow.

THE RESURRECTION MEN is not for delicate sensibilities - there is a lot of crude language at the beginning, which probably seems stronger because it is actually being read to you. The book is #2 in Fraser's Thomas Potts series, of which there are now 4 titles. The author appears to be determined to give readers a historically authentic experience.