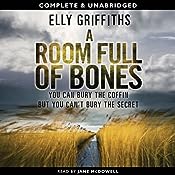 
It is Halloween night, and the local museum in King's Lynn is preparing for an unusual event - the opening of a coffin containing the bones of a medieval bishop. But when Ruth Galloway arrives to supervise, she finds the museum's curator lying dead beside the coffin. It is only a matter of time before she and DI Nelson cross paths once more, as he is called in to investigate. Soon the museum's wealthy owner lies dead in his stables, too. These two deaths could be from natural causes - but Nelson isn't convinced.

If I wanted to be picky about this book I could say that Elly Griffiths has recently discovered Australian Aboriginal archaeology and anthropology. If you didn't know anything about 19th and early 20th century collection of indigenous artefacts and bones and their transportation to colonial "mother countries", and the consequent recent struggles to have these items returned for burial in their homelands, then you will after reading A ROOM FULL OF BONES.  For me as an Australian reader it is interesting to find this as a topic running through the book. I thought it was good too that Elly Griffiths points out for us one of the issues that archaeologists debate: the conundrum of what to do with bones once you have disinterred them.

One comment that I recently read inferred that the story line is "more of the same", i.e. that the reader didn't feel satisfied that the content of the story was sufficiently different to earlier books in the series. I think that criticism was a little unjust. I have read the series from the beginning and I think I enjoyed this one as much as each of the earlier ones.

If you are wondering, this really is a series you should read in order. There is terrific character development and persistence of quite a large number of interesting characters from one book to the next. The books peek into Ruth Galloway's life at intervals, and central to it all is Ruth's relationship to DI Harry Nelson. The sleuthing combination of a forensic archaeologist and a detective is excellent.

In previous reviews I have commented that the story was often written in the present tense which was a little disconcerting. I didn't notice that so much in A ROOM FULL OF BONES, or perhaps if it was there, it didn't not impinge on my reading in quite the same way.

This series capitalises on our interest in the past: there are passing references to Time Team and to tv shows like the Antiques Road Show.

Elly Griffiths is a terrific story teller and I am looking very much forward to #5 in the series.

thanks for a great review.

I read this one earlier in the spring - couldn't wait for the US release and ordered it from the UK. I'm a big fan of this series and hope it continues for a long time. I concur with the "reading in order" idea and happily, this series is only up to #4 - completely catch-up-able (a word?). LOL

I keep thinking I'm going to read one of Elly Griffiths' books. They sound interesting.

Okay, I surrender. This review just convinced me to order A Room Full of Bones from Book Depository.

My library doesn't have it and I'm concerned about dwindling book budgets so I must buy it or be deprived of one more book with Ruth Galloway.