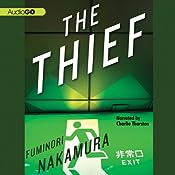 The Thief is a seasoned pickpocket. Anonymous in his tailored suit, he weaves in and out of Tokyo crowds, stealing wallets from strangers so smoothly sometimes he doesn’t even remember the snatch. Most people are just a blur to him, nameless faces from whom he chooses his victims. He has no family, no friends, no connections....

But he does have a past, which finally catches up with him when Ishikawa, his first partner, reappears in his life, and offers him a job he can’t refuse. It’s an easy job: tie up an old rich man, steal the contents of the safe. No one gets hurt. Only the day after the job does he learn that the old man was a prominent politician, and that he was brutally killed after the robbery. And now the Thief is caught in a tangle even he might not be able to escape.

From a Western point of view, this is an unusual story told from the thief's point of view.
The first signs that things may not be well are the things that appear in his pockets that he doesn't remember lifting.  Has he in his turn been the victim of a skilled pickpocket?

He has been a thief all his life, always coveting the treasures other children had, and gradually perfecting his techniques as a pickpocket. He specialises in replacing the wallets after he has removed what he wants, so the victim does not immediately realise his cash has been taken.

He is alarmed when he meets a boy who shoplifts with his mother and who is setting his sights on life as a pickpocket. He tries to divert the boy, at first refusing to show him any techniques, and then by giving him money to adopt a better life.

The murder of the old man in the house robbery leaves The Thief ensnared in a trap where he is required to steal to order. Failure to carry out the thefts will result in his own death and each task gets harder than the last. He realises he may not be around much longer.

Many other reviewers have commented on the gritty view the novel gives of the underbelly of Tokyo life.

It is a surprisingly short audio book, but is apparently unabridged although Amazon says the hard back version is 304 pages. At first I was put off by the narrator's American accent, but then became used to it.

See another review on Reactions to Reading

Kerrie - Thanks for the fine review. Interesting isn't it how the accent or something else about a narration can make a difference in experiencing a book. I listened for instance to books that take place in the American South but are narrated by someone with a different accent and it does make a difference.

I read this recently, and found some of the rhythms in the dialogue slightly odd - I'd be really interested to hear the work read and see how a narrator deals with the dialogue.