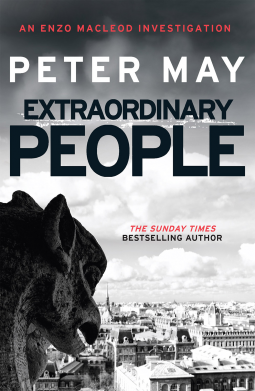 PARIS
An old mystery
As midnight strikes, a man desperately seeking sanctuary flees into a church. The next day, his sudden disappearance will make him famous throughout France.
A new science
Forensic expert Enzo Macleod takes a wager to solve the seven most notorious French murders using modern technology - and a total disregard for the justice system.
A fresh trail
Deep in the catacombs below the city, he unearths dark clues deliberately set – and as he draws closer to the killer, discovers that he is to be the next victim.

What has happened to Jacques Gaillard? The brilliant teacher who trained some of France's best and brightest at the Ecole Nationale d'Administration as future Prime Ministers and Presidents vanished ten years ago, presumably from Paris. Talk about your cold case.


Enzo Macleod undertakes the quest to find out what happened to Peter Gaillard as the result of a bet that modern methods applied to an old cold case will result in new evidence, and eventually to the solving of the case. Formerly employed in Scotland as a forensics expert, Enzo is working at Toulouse university teaching biology. His "modern methods" involve a lot of internet usage, and investigation of DNA, both of which would not have been possible ten years earlier.

The search for Peter Gaillard leads him into conflict with some very senior forces who definitely do not want the truth unearthed, and there are several attempts on Enzo's life.The story gives us a lot of family background for Enzo: why he came to France from Scotland, abandoning brilliant career prospects; and his two daughters who do not know each other.

The title is taken from Dostoevsky's Crime and Punishment and refers to people who regard themselves as above or outside the law. There is even a touch of that about Enzo himself.

It did strike me fleetingly that EXTRAORDINARY PEOPLE might have been Peter May's answer to Dan Brown's DA VINCI CODE. My second thought was a regret that I do not know the streets and arondissements of Paris better because they feel so important to the plot of this novel. The reader is at a bit of a disadvantage in interpreting the clues that surface every time Enzo discovers something new about Peter Gaillard.

Very readable, and I'll probably now look for the next in the series.