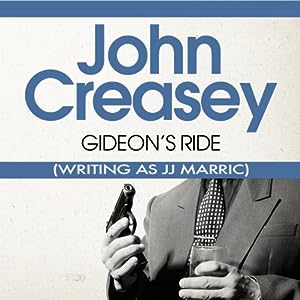 A gang is at work robbing any passenger they find travelling alone on the top deck of London's buses. One night they strike too hard and murder results, followed by another killing of the bus conductress who could have indentified them. This is just one of several cases laden with human interest and suspense which came Gideon's way in another busy week at Scotland Yard.

I've been working my way through these pioneering police procedurals and I've probably read enough for now. There is a sameness to them all as we are presented with the daily working of the London Police force, George Gideon's determination that only the best is acceptable, and the wide range of cases that he has to deal with.

They do make very acceptable short journey listening but they seem to follow a formula. There is little doubt that Gideon will eventually catch up with the crims although some suspense is created by whether he will do it in time to prevent another murder etc. As the blurb says, each book has several cases in it, and there is also some human interest in the form of Gideon's family life, and a picture of London life in the 1960s. In their day they would have made engrossing reading as they forged a pattern for police procedurals.

In GIDEON'S RIDE the cases are quite varied and Gideon is dissatisfied at the end because one murderer has got away for the time being.

I need to read and possibly spotlight some of Creasy's work. Thanks for the reminder, Kerrie.