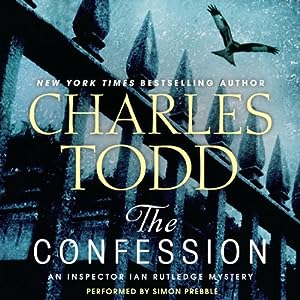 Declaring he needs to clear his conscience, a dying man walks into Scotland Yard and confesses that he killed his cousin five years earlier during the Great War.

When Inspector Ian Rutledge presses for details, the man evades his questions, revealing only that he hails from a village east of London.

With little information and no body to open an official inquiry, Rutledge begins to look into the case on his own. Less than two weeks later, the alleged killer’s body is found floating in the Thames, a bullet in the back of his head.

The inspector’s only clue is a gold locket, found around the dead man’s neck, that leads back to Essex and an insular village whose occupants will do anything to protect themselves from notoriety. For notoriety brings the curious, and with the curious come change and an unwelcome spotlight on a centuries-old act of evil that even now can damn them all.

Another really good read from Charles Todd. Simon Prebble does an excellent job of the audio presentation. Although this is #14 in the series, it is only 1920 so we haven't progressed very far from the demons and ghosts of World War One. Ian Rutledge seems in better control of his own personal ghost Hamish, but even so wonders whether sometimes people hear him in conversation with Hamish.

Things are changing at the Yard. The Chief Inspector has had a heart attack and been hospitalised and so underlings like Rutledge are able to take advantage of the laxer supervision to operate this case on his own initiative. Of course that also means that the Yard doesn't actually know where he is and should anything happen to him, it will be some time before help arrives, if ever.

The audio versions of these books are produced to a very high standard, assisted by the fact that each story is carefully plotted and sufficiently tangled to be intriguing. World War One lurks there as a background without being intrusive.

I've also reviewed
SEARCH THE DARK
A PALE HORSE
A TEST OF WILLS
4.5, A DUTY TO THE DEAD
4.7, A LONELY DEATH
4.7, HUNTING SHADOWS