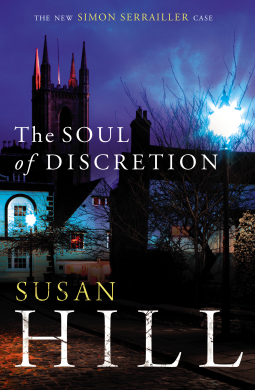 The cathedral town of Lafferton seems idyllic, but in many ways it is just like any other place. As part of the same rapidly changing world, it shares the same hopes and fears, and the same kinds of crime, as any number of towns up and down the land.

When one day DC Simon Serrailler is called in by Lafferton's new Chief Constable, Kieron Bright, he is met by four plainclothes officers. He is asked to take the lead role in a complex, potentially dangerous undercover operation and must leave town immediately, without telling anyone - not even his girlfriend Rachel, who has only just moved in with him.

Meanwhile, Simon's sister Cat is facing difficult choices at work that will test her dedication to the NHS. But an urgent call about her and Simon's father, Richard, soon presents her with a far greater challenge much closer to home.

To complete his special op, Simon must inhabit the mind of the worst kind of criminal. As the op unfolds, Lafferton is dragged into the sort of case every town dreads. And Simon faces the fight of his life.

I was once an assiduous follower of this series, but as you can see from my list below, it is about six years since I've read one. A few things have obviously happened in Simon Serrailler's life since then.

There are really four major scenarios explored in the novel: Simon Serrailler's undercover mission to identify men both detestable and dangerous;  dying with dignity as it applies to terminally patients; Rachel's search for work to give meaning to her life; and how women fare when they cry "rape". As in the earlier novels that I've read the human interest aspects are cleverly interwoven with the criminal investigation. And the ending really leaves no doubt that there will be another in the series.

There were times when I felt as though the author was using the novel to promote her own strong viewpoints, but I guess that happens in most novels, if a little less blatantly.

The plot did leave me wondering whether police authorities would ever mount an undercover operation like the one that Serrailler becomes involved in, but the narration carries with it a great feeling of authenticity.