Review:SINS OF THE FATHER, Graham Hurley 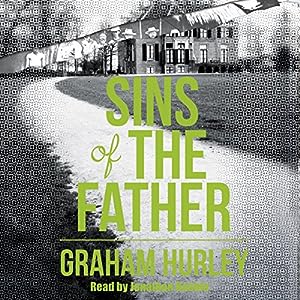 A rich old man, Rupert Moncrieff, is beaten to death in the silence of his West Country waterside mansion, his head hooded and his throat cut. His extended family are still living beneath his roof, each with their own room, their own story, their own ghosts, and their own motives for murder.

And in this world of darkness and dysfunction are the artefacts and memories of colonial atrocities that are returning to haunt them all.

At the heart of the murder investigation is DS Jimmy Suttle who, along with his estranged journalist wife Lizzie, is fighting his own demons after the abduction and death of their young daughter, Grace.

But who killed Rupert Moncrieff? And what secrets is the house holding onto that could unravel this whole investigation? The enquiry takes Suttle to Africa and beyond as he slowly begins to understand the damage that human beings can inflict upon one another. Not simply on the battlefield. Not simply in the torture camps in the Kenyan bush. But much, much closer to home.

Although I was convinced it was not so, my records tell me that this is the first novel by Graham Hurley that I have reviewed in this history of this blog.

The structure is similar to what we have seen in recent years in British crime fiction: two independent stories connected by a common factor, in this case a married couple, and then threading their way through the manuscript, more or less in step. Almost, in this case, two novels in one.

The murder investigation, undertaken by the team that DS Jimmy Suttle is part of, explores how British colonial administrators treated the local inhabitants, in this case in Kenya, whom they regarded as racially inferior. In fact Suttle and his boss go out to Africa to work out whether a local who recently visited England could be responsible for the gruesome murder, or whether the answer is much closer to home. Meanwhile Suttle's wife Lizzie is trying to make some sense of the death of their four year old daughter Grace. She has been offered a book contract to write about the impact on their lives. Should she take it?

As with novels with similar structure the novel's narrative hops almost without warning from one story to another, making sure the reader stays alert.

Graham Hurley is an award-winning TV documentary maker who now writes full time. He has now published 25 novels. He has lived in Portsmouth for over 20 years. He is married and has grown-up children.

You make an interesting point, Kerrie, about the increasing popularity of multiple storylines. Interesting that's becoming more prevalent. Glad you enjoyed this one.