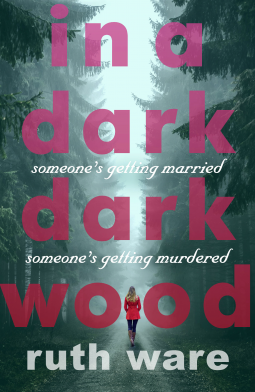 In a dark, dark wood

Nora hasn't seen Clare for ten years. Not since Nora walked out of school one day and never went back.

There was a dark, dark house

Until, out of the blue, an invitation to Clare’s hen do arrives. Is this a chance for Nora to finally put her past behind her?

But something goes wrong. Very wrong.

Some things can’t stay secret for ever.

This is an excellent debut title. (note it is not being published until August 2015)

After hearing nothing from her friend Clare for ten years, Nora gets an invitation to Clare's hen do. She is not sure why Clare has invited her, particularly since she doesn't appear to have been invited to the wedding.

The weekend is being spent at an isolated cottage in Northumbria and in the long run there are only six of them, including a male whom Nora has never met before. Nora realises this is not really going to be a fun weekend, particularly after she is told who Clare is marrying.

48 hours after arriving for the weekend Nora wakes up in a hospital bed, alive, but knowing that someone is dead. She tries to piece together what happened, and why the police appear to have a guard outside her door.

Ruth Ware grew up in Lewes, in East Sussex. After graduating from Manchester University she moved to Paris, before settling in north London. She has worked as a waitress, a bookseller, a teacher of English as a foreign language and a press officer. Married, with two small children, In a Dark, Dark Wood is her debut thriller.

Oh, this one sounds very good. Making a note of it! And thanks for the highlight.

I have a copy of this one, it does sound very good so I'm glad to see it got a high rating from you.