Review: THOSE WE LEFT BEHIND, Stuart Neville 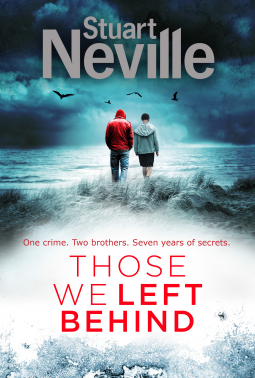 They’d used the same picture in the Sunday red top she’d read at the weekend. SCHOOLBOY KILLER TO BE RELEASED, the headline had screamed above a half-page story.'

DCI Serena Flanagan, newly returned to work after undergoing treatment for cancer, is forced to confront a troubling case from her past: the murder conviction of a 12-year-old-boy who has just been released back into the community.
When 12-year-old Ciaran Devine confessed to murdering his foster father it sent shock waves through the nation.

DCI Serena Flanagan, then an ambitious Detective Sergeant, took Ciaran's confession after days spent earning his trust. He hasn’t forgotten the kindness she showed him – in fact, she hasn't left his thoughts in the seven years he’s been locked away.

Probation officer Paula Cunningham, now tasked with helping Ciaran re-enter society, suspects there was more to this case than the police uncovered. Ciaran’s confession saved his brother Thomas from a far lengthier sentence, and Cunningham can see the unnatural hold Thomas still has over his vulnerable younger brother.

When she brings her fears to DCI Flanagan, the years of lies begin to unravel, setting a deadly chain of events in motion.

Set in Belfast, really a police procedural, this was a difficult plot structure to pull off successfully: three main strands and two time frames seven years apart. I think Neville has done it very well.

Life has moved on since 12 year old Ciaran Devine confessed to murdering his foster father. His brother Thomas has served five years for his role in the murder and has been "out" two years waiting for his younger brother's release. Ciaran is nearly twenty but in many ways still immature, a child who relies on his older brother for advice, and even for permission to speak. Flanagan is a mother of two, and recently returned to work after a bout of breast cancer and is a member of a breast cancer support group. . She remembers Ciaran Devine very well. Paula Cunningham too remembers Ciaran Devine and his older brother Thomas.

Those We Left Behind sounds right up my alley. I hope it's going to be released on Kindle at the same time (and at a reasonable price).

Oh, this does sound good, Kerrie. Thanks for sharing.

I definitely like the sound of this one. Will be watching for it. Don't think it's out in the US until the fall.