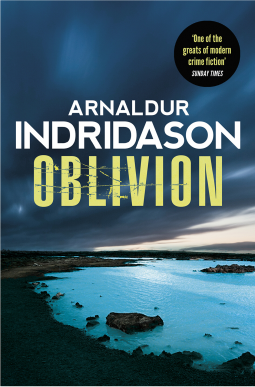 THE QUICK
A woman swims in a remote, milky-blue lagoon. Steam rises from the water and as it clears, a body is revealed in the ghostly light.

Miles away, a vast aircraft hangar rises behind the perimeter fence of the US military base. A sickening thud is heard as a man’s body falls from a high platform.

Many years before, a schoolgirl went missing. The world has forgotten her. But Erlendur has not.

THE SEARCHER
Erlendur Sveinsson is a newly promoted detective with a battered body, a rogue CIA operative and America’s troublesome presence in Iceland to contend with. In his spare time he investigates a cold case. He is only starting out but he is already up to his neck.

In  4.6. STRANGE SHORES, #11 in the Erlendur series, published in 2011, we thought we had farewelled Erlendur, who seemed to be becoming increasingly troubled in the later novels in the series.

But now Indridason has begun publishing "prequel" novels which tell stories from before JAR CITY, the first Erlendur novel published in English in 2004. Erlendur has recently joined CID and already comes across as preoccupied with people who have been lost in Iceland's severe weather.

I'm not sure whether the author thinks that readers new to his novels will read these books first or whether he is mainly catering for those who have already followed Erlendur through the published series. I brought to OBLIVION a knowledge of what happened in the later series, and so already knew some of Erlendur's background. I rather think he is exploiting what he sees as a ready market created by the series published in English 2004-2011.

The Erlendur of OBLIVION is without doubt the same detective that filled the pages of the original series, and picks up on themes that surface in that series. But for me there was just something slightly "thin" about the story. Creating prequels must create continuity problems of a unique kind.

It does explore the ramifications of Iceland allowing itself to be used as a military base for US army and navy, and how that affects Icelandic sovereignty.

Sorry this wasn't up to his stellar standard, Kerrie. Interesting how the prequel is becoming such a popular way to get new interest.